Pfizer announced today its vaccine is safe and 100 percent effective in children ages 12 to 15.

Approximately 2,260 children participated in the trial. Half of them got the actual vaccine and the other half got an injection that doesn’t have the vaccine in it called a placebo.

FOX 5 spoke to a trial participant – 12-year-old Sophie Holland in Raleigh, North Carolina. The sixth-grader got her first shot in January and second shot in February. 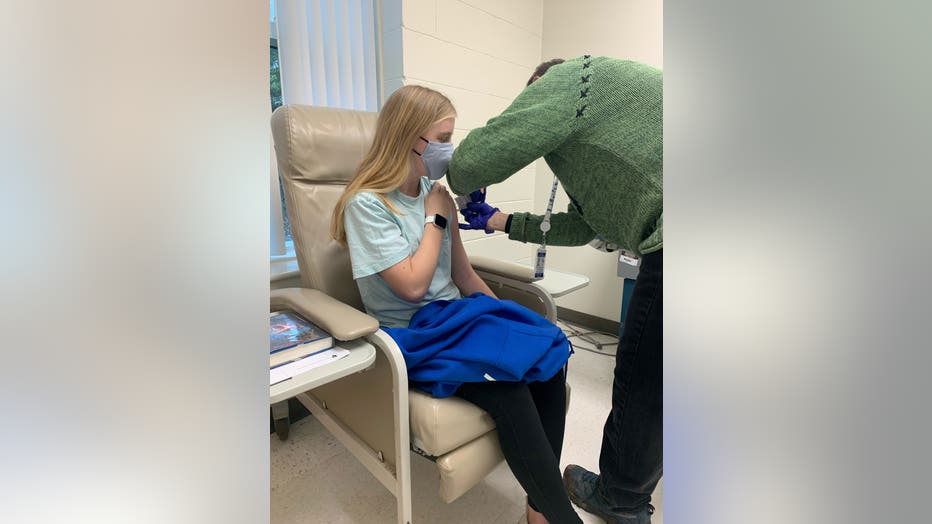 Her dad, Dr. Thomas Holland, is an associate professor of infectious disease at Duke University.

"After the first dose of the vaccine, I felt pretty good, but then after the second dose – I did get sick for one or two days, but after that – I felt great," said Sophie Holland.

Her dad, Dr. Holland added: "It led to sort of an odd situation where Sophie came down in the middle of the night the night after the vaccine and said – I feel terrible and this is great – because it meant that she probably had gotten the actual vaccine so she was excited to get a fever and chills."

The Pfizer vaccine is the first to show it is 100 percent effective for children ages 12 to 15. Participants will be monitored for the next two years. They will have to do blood work, antibody testing, and COVID-19 testing. During the trial, several children with the placebo shot contracted COVID-19. However, none of the vaccinated children have developed the virus far.

A breakthrough in the fight against the coronavirus – Pfizer says its vaccine is safe and 100 percent effective in children ages 12 to 15.

Some parents are still hesitant about the vaccine, but a majority FOX 5 talked to in Arlington, Virginia, find this an exciting step to get back to normal and would want their child to get the shot.

A father said: "I would definitely have to go with it because if your kids are getting all kids of vaccinations when they’re babies why not go through with getting this vaccination that can prevent them from getting sick down the road."

A mother said: "I would just for the protection from the virus so I had a good experience with the vaccine – no side effects or anything."

When will children ages 12 to 15 officially be able to get the Pfizer vaccine? Well, health experts FOX 5 spoke to today believe it will be approved by the summer or fall.

The FDA will still have to approve the use of Pfizer’s vaccine on children, but it’s a promising turning point for vaccinating young Americans and getting closer to herd immunity especially as schools prepare for a greater return to in-person learning in the fall.