Record number of women to serve in the next Congress

WASHINGTON - Nancy Pelosi formally announced her bid to run for House Speaker again as the House Democratic majority is shrinking and moderates are blaming the progressive agenda for their losses.

Pelosi wrote each Democratic member a letter Thursday outlining the agenda for the next two years and asked for their support in reelecting her speaker. She wrote confidently that Joe Biden won the presidency, referring to working with "President-elect Joe Biden and Vice President-elect Kamala Harris."

"Our vision for the next two years must be built on the success of Democratic House Majority in the 116th Congress, and to harness the extraordinary visions, values and vibrancy of our Caucus to secure the progress that the American people deserve," Pelosi wrote in the letter, obtained by Fox News.

She continued: "In that spirit, I am writing to request your support to be re-elected as Speaker. I do so with the utmost respect for the diverse viewpoints in our Democratic Caucus, the gravity of this role the urgency of the challenges ahead. I also do so with the great joy and appreciation to so many of you who have already offered your support."

Earning the speakership should be a tougher feat this year for Pelosi because the number of Democrats in her caucus is shrinking due to unexpected losses on Tuesday. Pelosi and Democrats were confident about expanding their majority by winning seats deep into President Trump territory, but instead moderate members from swing districts suffered losses.

As of 10 a.m. Friday, seven Democrats lost their reelection bids, and no GOP incumbent had suffered defeat. Republicans picked up the seat of outgoing Libertarian Rep. Justin Amash in Michigan, too. 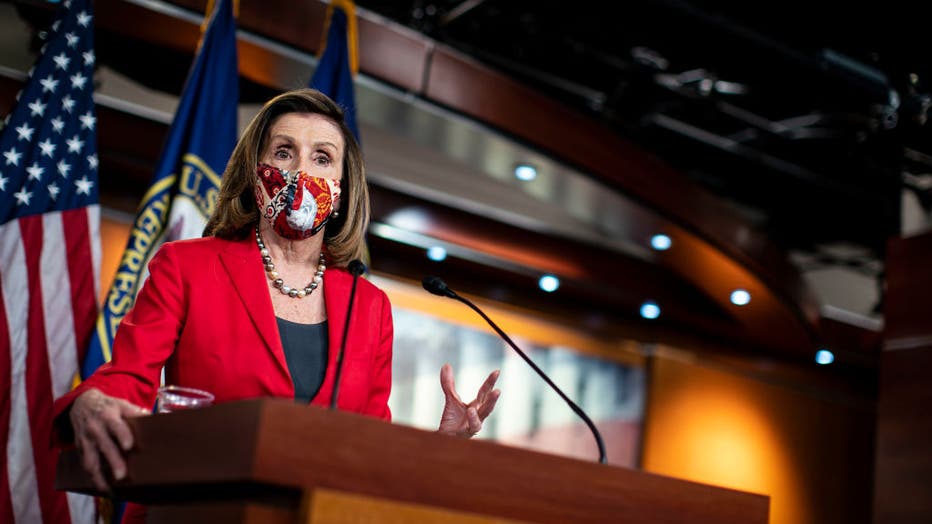 Speaker of the House Nancy Pelosi (D-CA) talks to reporters during her weekly news conference in the House Visitors Center at the U.S. Capitol on November 6, 2020 in Washington, DC. (Photo by Al Drago/Getty Images)

Democrats flipped two open seats in North Carolina thanks to redrawn congressional maps. So they currently have a net loss of five seats.

The party breakdown now stands at 208 for Democrats to 193 for Republicans with 34 races yet to be called. Republicans believe as the counting continues they'll flip more seats and their ranks could swell to 208 members and beyond.

On a Democratic caucus call Thursday afternoon, members vented frustration about the unexpected losses and some blamed progressive ideas like defunding the police, socialism, and the Green New Deal as costing Democrats their seats in swing districts.

Rep. Abigail Spanberger, D-Va., was particularly animated and lashed out at the leftward lean of the caucus, Fox News has confirmed.

She told her colleagues: “We lost races we shouldn’t have lost. Defund the police almost cost me my race because of an attack ad. Don’t say socialism ever again. We need to get back to basics.”

Spanberger was among the 15 Democrats who did not support Pelosi two years ago for speaker. Pelosi could afford the defections because Democrats had such a strong majority after the 2018 midterm elections.

RELATED: Record number of at least 131 women to serve in the next Congress

But this year will be different with the smaller numbers for Democrats.

Pelosi needs the majority of votes on the House floor to win the speakership. So if the House is 435 members, that's 218 votes.

Republicans, gleeful about their gains, have already predicted Pelosi is in trouble.

"I mean Nancy Pelosi doesn't even have a majority where she can be elected speaker again," Rep. Tom Emmer, R-Minn., chairman of the National Republican Congressional Committee, said Wednesday. "Whoever would have guessed that it'd be possible that Nancy Pelosi might not be the speaker?"