Following the Twitter feud that ensued between Chick-fil-A and Popeyes, an elementary school teacher eager to get her hands on Popeyes’ new sandwich witnessed a peace offering between employees of the two restaurants.

GREENSBORO, N.C. - Following the Twitter feud that ensued between Chick-fil-A and Popeyes, an elementary school teacher eager to get her hands on Popeyes’ new sandwich witnessed a peace offering between employees of the two restaurants.

Jené Walker and her coworker were headed to a nearby Popeyes in North Carolina to try the sandwich when they saw a Chick-fil-A worker handing out Chick-fil-A sandwiches to Popeyes employees.

Walker said the man she saw was wearing an orange shirt, and at first, she thought he was a Popeyes employee holding a Chick-fil-A bag.

“I was joking with him, like, ‘What are you doing over here? That’s weird you're over here with a Chick-fil-A bag at Popeyes.' Just the timing was weird,” recalled Walker.

She said the man explained to them that he had noticed the Popeyes had been crowded and the workers stressed, and decided to bring some chicken sandwiches to the workers, “out of the kindness of his heart,” said Walker. 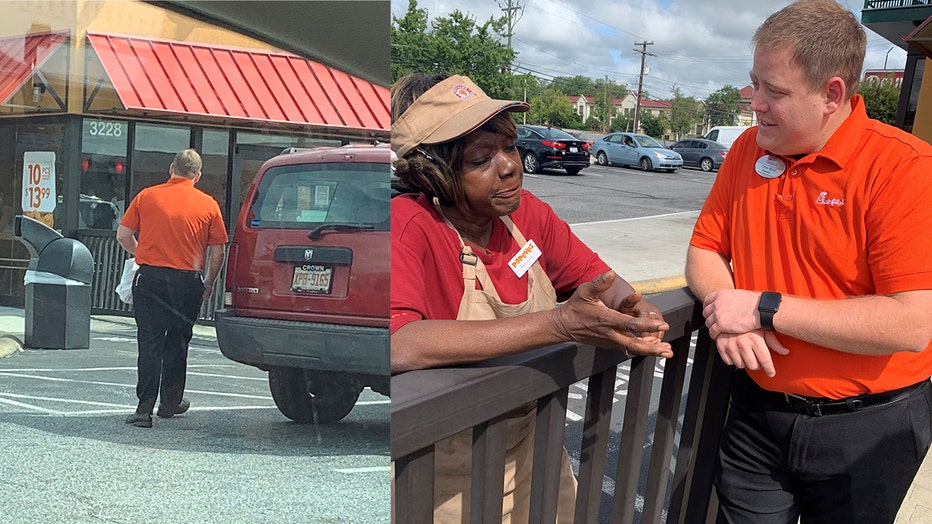 Jené Walker captured a Chick-fil-A employee walking over to a nearby Popeyes and handing out free sandwiches to Popeyes employees. (Photo by Jené Walker)

“I just felt that that was just super awesome, especially with everything going on in the media with them,” Walker said.

The man’s generosity didn’t stop at the Popeyes employees. He offered free food to Walker after she and her colleague were disappointed to learn that they would not be enjoying the new chicken sandwich, since the store was sold out.

She said he thanked them for their hard work being teachers and gave them free meals.

Because Walker has yet to try Popeyes’ sandwich and will probably have to wait even longer since the company officially announced they were sold out nationwide, she says for now, her allegiance lies with Chick-fil-A.