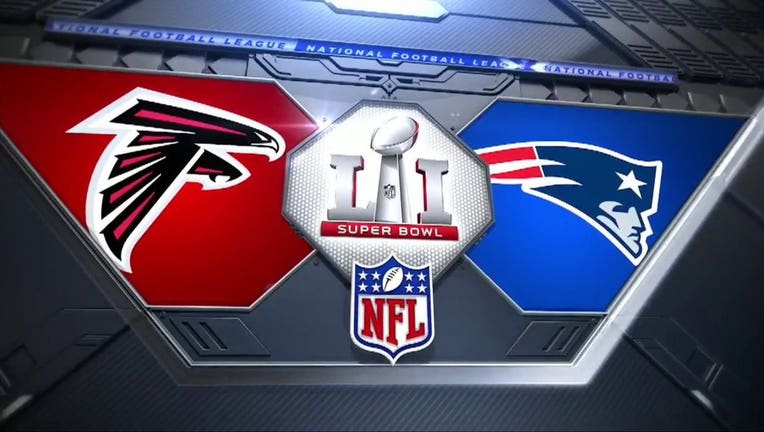 Tom Brady has taken the field for the Super Bowl, and fired up New England fans with a couple of fist pumps as he finished a run toward the end zone covered with the Patriots logo.

Brady is trying to become the first quarterback to win five Super Bowls. It would give him one more than Terry Bradshaw and Joe Montana.

The Patriots are going for their fifth title as well. From the sound of things during the pregame, they've got plenty of support at Houston's NRG Stadium.

President Donald Trump is predicting an 8-point victory by the New England Patriots in the Super Bowl.

Trump made the prediction during a Fox News interview taped Saturday and aired a few hours before the game.

While Trump counts Patriots quarterback Tom Brady as a friend and says he likes coach Bill Belichick and owner Bob Kraft, he also praises the Atlanta Falcons as a "fantastic team."

But, Trump says, "You have to stick up for your friends, right?"

Trump tells Fox News host Bill O'Reilly that the Patriots are more comfortable because they've been to the big game before. He says, "Once you've done it, there's a lot less pressure."

The Patriots have won the Super Bowl four times while the Falcons have played for the championship once and lost.

If you're without a device in New York City and need an update on who's winning the Super Bowl, find the Empire State Building.

At kickoff at Houston's NRG Stadium, the famous tower in Manhattan will be split between the colors of the New England Patriots (blue, red and white) and the Atlanta Falcons (red and black). When each team scores, the building will sparkle in that team's colors. It will remain lit in the colors of the team with the lead.

After the game, the winning team's colors will sparkle for an hour before remaining lit in those colors until sunrise.

The Empire State Building did the same thing a year ago when Denver beat Carolina last year.

Fans started entering NRG Stadium four hours before the Super Bowl between the New England Patriots and the Atlanta Falcons.

The Patriots are going for their fifth Super Bowl in the Tom Brady-Bill Belichick era. A win would give Brady the most Super Bowls in league history, breaking a tie with Joe Montana and Terry Bradshaw.

Country star Luke Bryan will do the national anthem and Lady Gaga will perform the halftime show.

New England will enter the game as a 3-point favorite.