The Chinese New Year Parade floats are always crowd pleasers but this year going virtual means finding new ways to celebrate.  Parade organizers say the pandemic has created an opportunity for local artists to showcase their talent and welcome in the year of the ox in a beautiful and unique way. Claudine Wong reports

OAKLAND, Calif. - The Chinese New Year Parade floats are always crowd pleasers but this year going virtual means finding new ways to celebrate.  Parade organizers say the pandemic has created an opportunity for local artists to showcase their talent and welcome in the year of the ox in a beautiful and unique way.

That’s not to say there aren’t a lot of challenges.

Stephanie Munson has been building floats for decades and says this year, "the differences are so countless I don't even know where to begin, obviously I’m in my sad little garage."

Her garage isn't sad but it isn't the huge warehouse on Pier 54 that Munson is used to working in.

She is not, as in years past, surrounded by glitter and floats and yet here she still celebrates the year of the ox

"I'm so impressed with and grateful for the people behind the Chinese New Year parade who had the imagination to find a new way to celebrate," says Munson.

Eleven oxen will help welcome in the new zodiac year and will be on display from February third until March 14. Each one is designed and painted by local artists.

"The coolest part of this project and the part I’m most excited about is its giving a lot of different artists the opportunity to showcase their own style," says Munson.  "It’s kind of inspired a little bit by the hearts of San Francisco and the cows on parade those different style projects that you have seen on display in different cities."

Munson says while she misses her crew, she has also found the silver lining in the added family time and this year the work has been a family affair.

Her daughter Deyi Robin Zhao is also an artist and says "this project was originally for Asian artists to express their work and Stephanie was like hmm my daughter is a pretty good Asian artist so I can do one."

She says it’s a very personal project, saying "for my design I used the Chinese flower peony which represents wealth and luck for everyone. I feel very connected but I feel like it is a traditional Chinese New Year parade. My designs are more to the modern style I feel really good about it because I really like to mix traditional and modern art together and I think it represents me and my culture."

Yes, it’s a different way of working with a different setting, and a smaller crew.  But those involved also say this moment is about more than a parade and more than just one night. Just like the ox, it’s about strength and resilience. 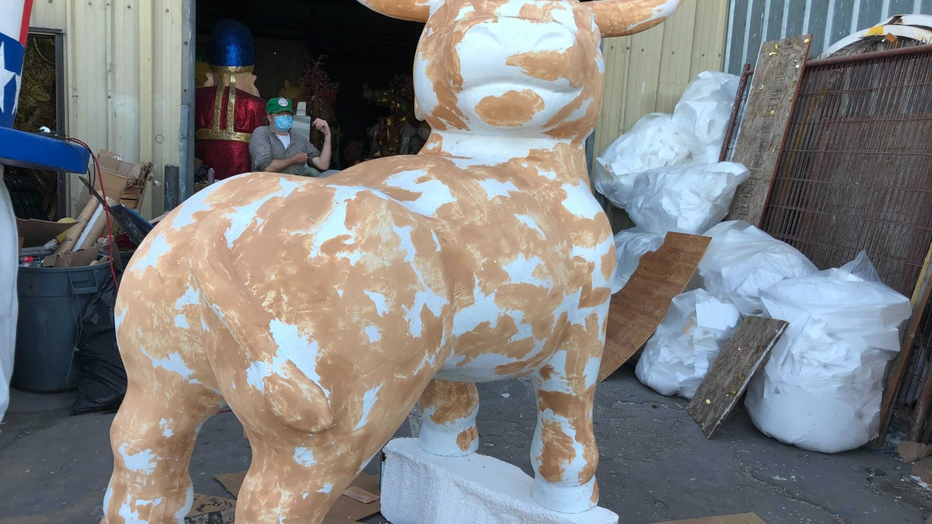