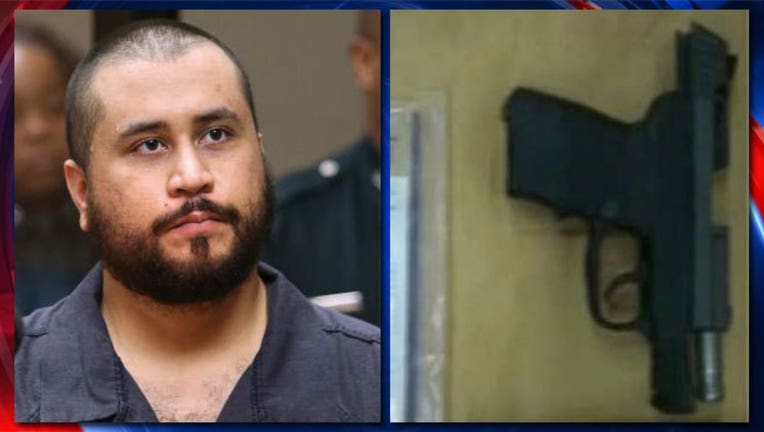 The weapon was removed from the GunBroker.com website Thursday, minutes after the auction was to begin. It was not immediately clear why the website took down the listing.

Zimmerman had told Orlando, Florida, TV station WOFL that the pistol was returned to him by the U.S. Justice Department, which took it after he was acquitted in Martin's 2012 shooting death.

The auction for the 9 mm Kel-Tec PF-9 pistol was to begin at 11 a.m. EDT Thursday and end 24 hours later. The website operators did not immediately respond to phone and email messages seeking comment.

The auction listing also said a portion of the proceeds would go toward fighting what Zimmerman calls violence by the Black Lives Matter movement against law enforcement officers, combatting anti-gun rhetoric of Democratic presidential candidate Hillary Clinton and ending the career of state attorney Angela Corey, who led Zimmerman's prosecution.

The listing ended with a Latin phrase that translates as "if you want peace, prepare for war."

Zimmerman, now 32, has said he was defending himself when he shot and killed Martin, 17, in a gated community near Orlando. Martin, who lived in Miami with his mother, was visiting his father at the time.

Zimmerman, who identifies as Hispanic, was acquitted in Martin's February 2012 shooting death. The case sparked protests and a national debate about race relations. The Justice Department later decided not to bring a civil rights case against Zimmerman.

Since then, Zimmerman has been charged with assault based on complaints from two girlfriends. Both women later refused to press charges and Zimmerman wasn't prosecuted. His estranged wife, Shellie Zimmerman, also accused him of smashing her iPad during an argument days after she filed divorce papers. No charges were filed because of lack of evidence. They were divorced in January.

David S. Weinstein, a former state and federal prosecutor, said it appeared Zimmerman is within his rights to sell the gun through the GunBroker website. Although only licensed firearms dealers are permitted to sell guns across state lines, the auction site says it transfers weapons from sellers to buyers through licensed dealers.

"I can't think of any legal reason why he can't sell the gun," Weinstein said.

Martin's parents both declined to address Zimmerman's actions in statements made through representatives.

Martin's mother, Sybrina Fulton, said through an attorney that she would rather focus on her work with the Trayvon Martin Foundation than respond to "Zimmerman's actions."

Daryl Parks, whose firm represented the Martin family during the trial, is now chairman of Fulton's foundation. He says Fulton is pushing for policies that protect youth and address gun violence.

Fulton also founded the Circle of Mothers conference, a three-day event to help mothers who have "lost children or family members" to gun violence. Democratic presidential candidate Hillary Clinton will be the keynote speaker at the event in Fort Lauderdale starting May 20.

In the auction listing, Zimmerman also rationalized selling the gun because of strong interest from collectors including "The Smithsonian Museum in Washington DC."