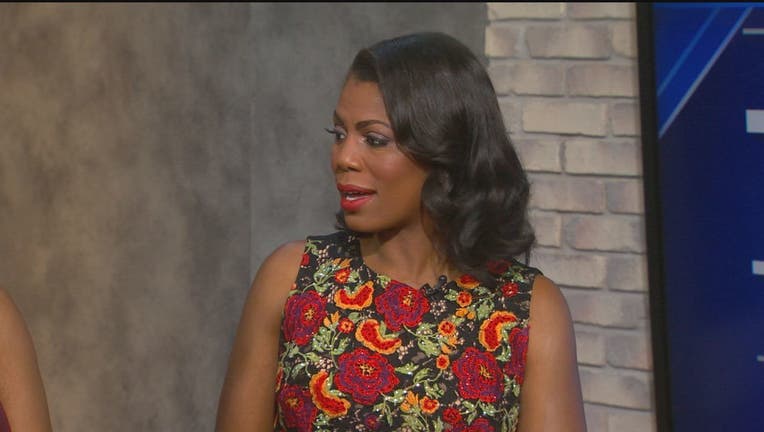 NEW YORK - (AP) -- Former "Apprentice" star Omarosa denies she was fired from her job at the White House -- and she's teasing that she has stories to tell about what she's seen and heard there.

In an interview Thursday with ABC's "Good Morning America, Manigault Newman also said reports that she made a scene while being escorted from the White House grounds this week are "100 percent false," and questioned why no photos or video of the alleged ruckus had surfaced.

She said she resigned after a conversation with White House chief of staff John Kelly about some of her concerns. Her White House pass has been cut off, according to the Secret Service, although she will remain on the staff through the administration's one-year mark.

"John Kelly and I had a very straightforward discussion about concerns that I had, issues that I raised and, as a result, I resigned and it will be taking place Jan. 20, when I leave this very interesting administration," Manigault Newman said.

She also denied reports that she tried to enter the White House residence to see President Donald Trump, calling those reports "ridiculous" and "absurd."

The outgoing presidential adviser alluded to seeing and hearing things during her 11 months in the White House that made her unhappy and uncomfortable. She declined to elaborate, citing her continued employment by the White House.

"But when I have a chance to tell my story ... quite a story to tell, as the only African-American woman in this White House, as a senior staff and assistant to the president, I have seen things that have made me uncomfortable, that have upset me, that have affected me deeply and emotionally, that has affected my community and my people," she said. "And when I can tell my story, it is a profound story that I know the world will want to hear."

One of Trump's most prominent African-American supporters, Manigault Newman was an assistant to the president and director of communications for the White House Office of Public Liaison, working on outreach to various constituency groups.

But the office languished under her watch and Kelly had indicated that changes were forthcoming -- including her dismissal, according to two White House officials who insisted on anonymity to discuss personnel matters because they were not authorized to speak publicly about them.

Better known by only her first name, Manigault Newman was escorted from the White House complex Tuesday night but was allowed to offer her resignation, according to the two officials. The U.S. Secret Service, which provides security for the president, tweeted Wednesday that it was not involved in her termination or in her escort from the grounds. Some published reports said Secret Service officers had physically removed Manigault Newman from the complex.

The agency confirmed that a pass granting her access to the complex had been deactivated.

"Our only involvement in this matter was to deactivate the individual's pass which grants access to the complex," the agency tweeted.

Trump bid her farewell in a tweet late Wednesday. "Thank you Omarosa for your service! I wish you continued success."

Her exit comes at the beginning of what's expected to be a wave of departures. Deputy national security adviser Dina Powell is also leaving early next year.

Manigault Newman, who drew a top salary of $179,700, was one of Trump's highest-profile supporters during the campaign. She also worked with Trump's transition team.

Kelly, the retired Marine general who has made it his mission to tighten White House operations and streamline how Trump gets information, has told aides that he wanted to curtail the number of White House officials with ill-defined positions and responsibilities.

Kelly took away Manigault Newman's ability to come and go from the Oval Office as she pleased. During the first months of Trump's administration, aides were known to wander in and out of meetings, a practice Kelly ended across the board. She also drew Kelly's ire by occasionally going around him to slip news articles to the president.

Manigault Newman enjoyed a close relationship with the president despite the fact that he once uttered the famous "You're fired!" line to her before dispatching her from the TV show. She held her April wedding at Trump's hotel blocks from the White House.