The expansive rules mandate that all employers with more than 100 workers require them to be vaccinated or test for the virus weekly, affecting about millions of Americans.

WASHINGTON (AP) - A dispute between Oklahoma's governor and the Pentagon over the COVID-19 vaccine mandate is setting up the first critical test of the military's authority to require National Guard troops to get the shot and laying the groundwork for potential protests from other states.

Acting on an order from Republican Gov. Kevin Stitt, the state's adjutant general sent a memo telling troops that they aren’t required to get the shot and "no negative administrative or legal action" would be taken against them if they refuse. That order from Brig. Gen. Thomas Mancino came as Stitt asked Defense Secretary Lloyd Austin to consider suspending the mandate for members of the Oklahoma Guard.

RELATED: US to invest billions in COVID-19 vaccine manufacturing to boost world supply

A senior defense official told reporters Wednesday that a governor does not have the authority to relieve Guard members of their military medical readiness requirements. The official, who spoke on condition of anonymity to discuss ongoing legal matters, said Guard members who refuse to comply will risk losing their National Guard jobs.

As of Wednesday, Austin had not formally responded to Stitt, the first and so far only governor to formally protest the Guard requirement. His challenge raises a number of legal questions and highlights the combative political debate over the vaccine. 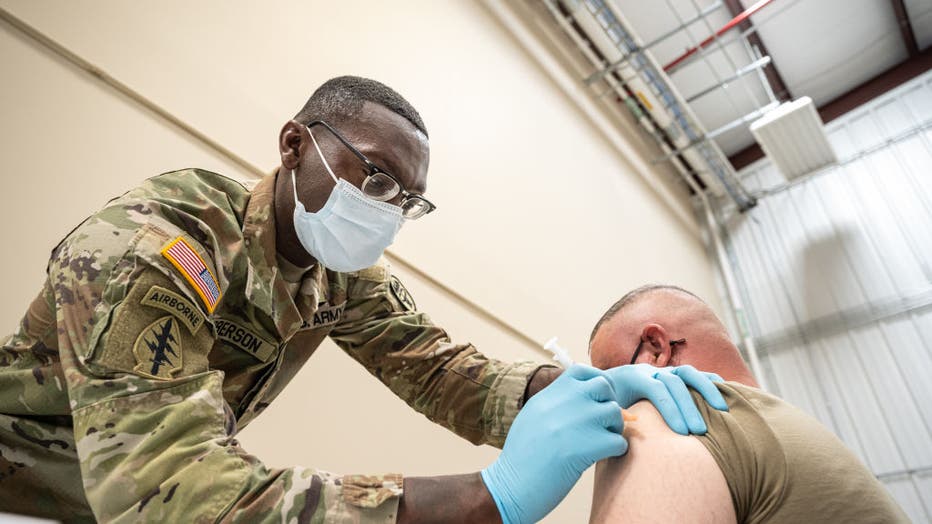 The White House and health officials have credited mandates with driving up vaccination rates and reducing deaths from the coronavirus pandemic. It's President Joe Biden's boldest move yet to persuade reluctant Americans to finally get a vaccine, but is facing legal fights by states, workers and federal employees.

The military is a unique testing ground. The Pentagon considers the vaccine critical to maintaining a ready force that can deploy on a moment’s notice to protect the nation, and Guard and Reserve members are part of that force.

Yet the Guard is also a bit different. When Guard troops are on state active duty, such as responding to local events, they report to the governor and are paid by the state. But during their monthly or annual training or when they are responding to larger disasters in the state, they are controlled by the governor but funded by the federal government.

The Guard can also be activated for federal duty, including for overseas deployments, under a different status that treats them like active-duty troops, under federal control and funding.

Pentagon officials have repeatedly said that Austin has the authority to set medical readiness requirements, including vaccines, for the entire force, including the Guard. They argue that Guard members must meet those requirements to maintain their federal recognition, be available to deploy and be paid for training.

In a letter this month, Stitt told Austin that the mandate "violates the personal freedoms of many Oklahomans, as it asks them to potentially sacrifice their personal beliefs in order to not lose their jobs." He said the state needs its Guard members for storms and other weather emergencies.

"It is irresponsible for the federal government to place mandatory vaccine obligations on Oklahoma national guardsmen which could potentially limit the number of individuals that I can call upon to assist the state during an emergency," Stitt said.

According to the governor’s office, more than 1,000 Army and Air Force Guard members, or about 13% of the state’s 8,200 troops, have indicated they won’t get the vaccine, according to an internal survey.

The 2,000-plus Air Guard members have until Dec. 2 to get shots, based on the deadline set by the Air Force. Stitt's spokeswoman, Carly Atchison, said that about 89% of the Air Guard has been vaccinated. A military official said the Oklahoma Air Guard is expected to reach about 95% by the deadline. The official spoke on condition of anonymity to discuss statistics not yet public.

About 40% of Oklahoma Army Guard members are vaccinated, Atchison said. The Army Guard is not required to be vaccinated until June.

Defense officials have declined to provide specifics on how the mandate will be enforced and how Guard troops may be disciplined or administratively processed out of the Guard and how quickly that could happen. They also won’t say whether commanders who decline to enforce the mandate will also be subject to any punishment.