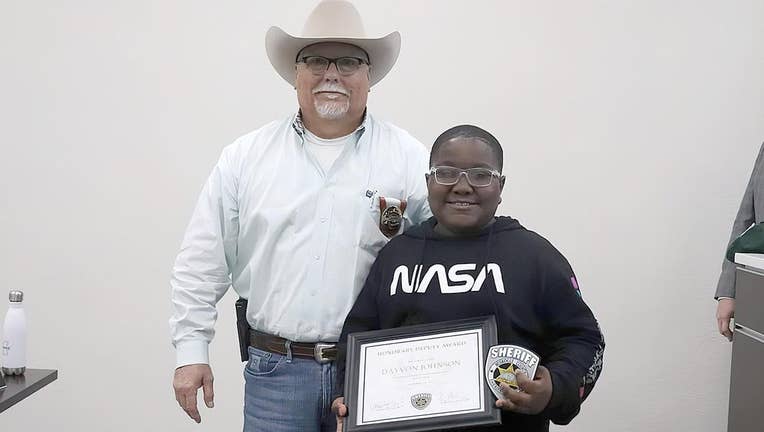 Police in Oklahoma are crediting a middle schooler for saving a choking classmate and a woman escaping a house fire on the same day. (Muskogee County Sheriff's Office )

TULSA, Okla. - Police in Oklahoma are crediting a middle schooler for saving a choking classmate and a woman escaping a house fire on the same day.

"Just in case you’re in the situation I was in, you can know what to do," he said.

He also helped rescue a woman using a walker trying to escape a house fire that same day.

"I thought, ‘Oh, she’s not moving fast enough.’ So, I ran across the street and helped her to her truck," Johnson told KOTV.

"It was a disabled lady and she was walking out of her house," Johnson told the Muskogee Phoenix . "She was on her porch. But I thought, being a good citizen, I would cross and help her get into her truck and leave."

His principal at Muskogee Public Schools’ 6th and 7th Grade Academy called Johnson a "dual hero" and a "kind soul."

"He has always indicated that he wants to be an EMT [emergency medical technician]. So, he got to put that desire into action," Principal Latricia Dawkins told the Muskogee Phoenix.

The honor of becoming an honorary deputy for the sheriff’s office also has Johnson feeling "excited and "good." While his mother, LaToya Johnson, said she is not surprised by her son’s heroic efforts to save others.