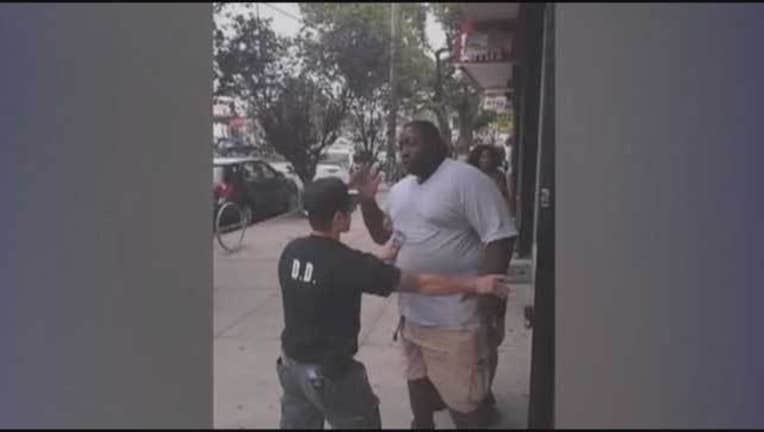 NEW YORK (AP) -- The family of a black man who died after being placed in a white police officer's chokehold reached a $5.9 million settlement with the city on Monday, days before the anniversary of his death.

Eric Garner's family in October filed a notice of claim, the first step in filing a lawsuit against the city, asking for $75 million.

Garner, who was 43, was stopped last July 17 outside a Staten Island convenience store because police officers believed he was selling loose, untaxed cigarettes. A video shot by an onlooker shows Garner telling the officers to leave him alone and refusing to be handcuffed.

Officer Daniel Pantaleo placed his arm around Garner's neck to take him down. Garner, who had asthma, is heard gasping "I can't breathe!" 11 times before losing consciousness. He was pronounced dead later at a hospital.

The city medical examiner found the police chokehold contributed to Garner's death. But a grand jury declined to indict the officer in the death. A federal probe is ongoing.

Chokeholds are banned by New York Police Department policy. Pantaleo says he used a legal takedown maneuver known as a seatbelt, not a chokehold.

Garner's death sparked demonstrations and became a flashpoint in a national debate about relations between police and minority communities.

While the city has a legal department that fields lawsuits, the comptroller's office also can settle claims. Comptroller Scott Stringer has made a point of doing that in civil rights cases, saying that resolving them quickly saves the city money on legal fees.

"Following a judicious review of the claim and facts of this case, my office was able to reach a settlement with the estate of Eric Garner that is in the best interests of all parties," Stringer said.

The city did not admit any liability.

Mayor Bill de Blasio said that hopefully Garner's family "can find some peace and finality" from the settlement.

"By reaching a resolution, family and other loved ones can move forward even though we know they will never forget this tragic incident," said de Blasio, who was scheduled to speak Tuesday at a church memorial service in Garner's honor.

Longtime civil rights attorney Jonathan Moore, the family's lawyer, said there also was a settlement with the Richmond University Medical Center, which responded to the scene. That settlement is confidential, and there was no one available at the hospital to comment. Moore said there would be a press conference Tuesday with the Rev. Al Sharpton and the family.

Sharpton said the settlement to the family was deserved but didn't resolve the larger questions around policing and minorities. He said a rally planned for Saturday calling for an expedited federal investigation into Garner's death would go on as planned.

"We did not march and build a movement just to get money," he said.

The city has reached settlements in other high-profile cases involving deaths of black men at the hands police officers. In 2004, the city agreed to pay $3 million to settle a lawsuit brought by the family of Amadou Diallo, who was shot by four police officers in 1999.

In 2010, the city agreed to pay $3.25 million to the estate of Sean Bell, who was killed in 2006 outside a strip club while leaving his bachelor party. Police had targeted the club for an undercover operation.

In January, the city settled with the family of teenager Ramarley Graham, who was shot by a police officer in 2012, for $3.9 million.

Last month, the comptroller's office agreed to pay $6.25 million to a man who spent nearly 25 years in prison before being exonerated in a killing that happened while he was more than 1,000 miles away vacationing at Disney World. A $6.4 million settlement was reached with a man exonerated in the 1990 killing of a rabbi.

Stringer also agreed to a $2.25 million payout to the family of a mentally ill inmate who died in a Rikers Island jail cell that sweltered to 101 degrees because of a malfunctioning heating system, and he helped put together a $17 million settlement in the case of three half-brothers who spent a combined 60 years in prison before their convictions were thrown out.