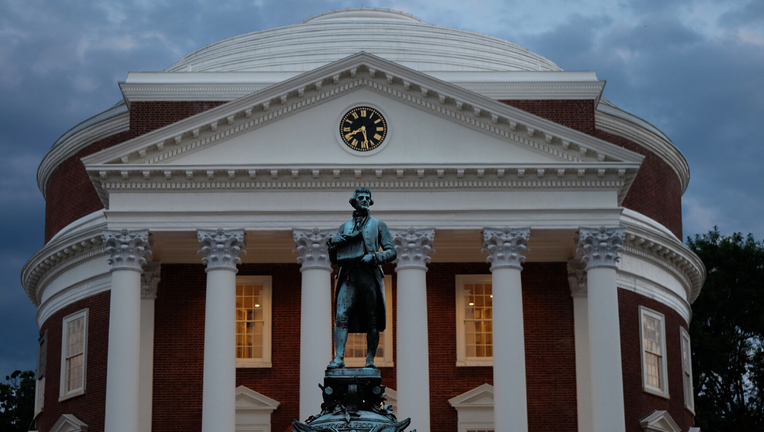 Charlottesville, VA - June 10: A statue of Thomas Jefferson stands in front of the Rotunda at the University of Virginia, Friday June 10, 2016. (Photo by Norm Shafer/ For The Washington Post via Getty Images).

FALLS CHURCH, Va. - Health directors in northern Virginia say the region is not yet ready to lift stay-at-home orders and other restrictions that the rest of the state is preparing to implement.

In a memo released Sunday, the health directors say the region is not meeting important benchmarks to reduce COVID-19 hospitalizations and employing contact tracers who could chart the progress of the coronavirus in the community. They say the data is unclear on other key metrics, like the rate of positive tests for the virus.

The region’s political leaders wrote a letter to Virginia Gov. Ralph Northam on Sunday accompanying the memo. They ask Northam to allow northern Virginia to move at a slower pace in easing restrictions.

Northam said he plans to implement the first phase of reopening the economy on Friday, though restrictions will remain severe. The first phase will allow some retail businesses to reopen with limited capacity, and private gatherings of less than 10 will be permitted. Indoor gyms would remain closed, beaches would remain closed to sunbathers and restaurants would still be prohibited from indoor dine-in service, though.

Northam has gone back and forth as to whether some regions of the state would be allowed to open earlier than others, but his most recent comments suggest that he would allow northern Virginia to exempt itself from Phase 1 if it didn’t feel it was ready.

The health directors, in their letter, say the region has met none of the metrics needed to show a sustained decline in cases or a preparedness to ease restrictions. They say that while hospitals have secured sufficient personal protective equipment, private physicians and long-term care facilities have not.

And they say they need more data from the state health department to determine whether the percentage of positive cases has decreased over the last 14 days.

For most people, the coronavirus causes mild or moderate symptoms, such as fever and cough that clear up within weeks. For some, especially older adults and those with existing health problems, it can cause more severe illness and death.