Rapper Nipsey Hussle was honored with a posthumous star on the Hollwood Walk of Fame on what would have been his 37th birthday.

LOS ANGELES - Slain rapper Nipsey Hussle was posthumously honored Monday with a star on the Hollywood Walk of Fame in a ceremony that drew such a large crowd it forced a shutdown of a stretch of Hollywood Boulevard.

Hussle's longtime girlfriend, actress Lauren London, Hussle's sister, Samantha Smith, and father, Dawit Asghedom, were on hand for the ceremony, during which his grandmother Margaret Boutte accepted the star on behalf of Hussle's family. The ceremony came on the 37th anniversary of Hussle's birth. 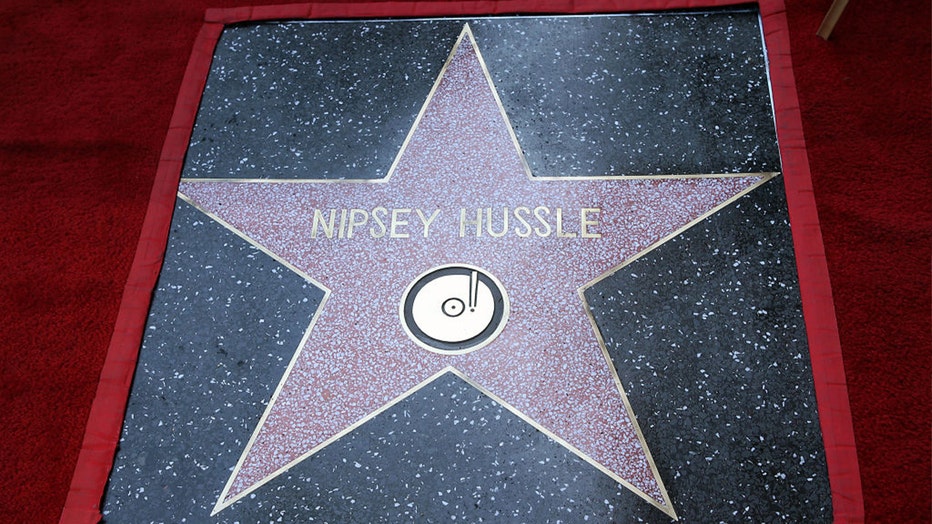 Nipsey Hussle is posthumously honored with a star on The Hollywood Walk of Fame on August 15, 2022 in Los Angeles, California. (Photo by Phillip Faraone/Getty Images)

To accommodate the large crowd attending the event, Hollywood Boulevard was shut down throughout the morning between Gower Street and Argyle Avenue. 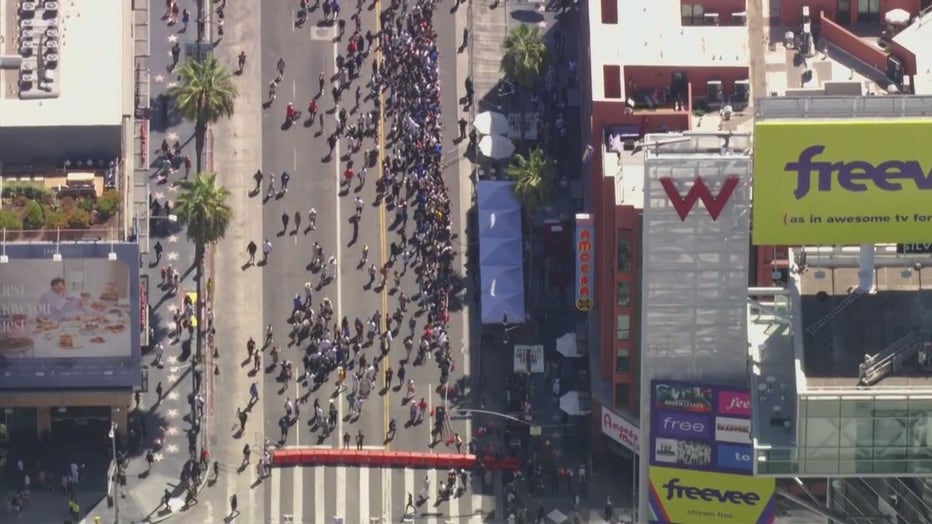 Nipsey Hussle was posthumously honored Monday with a star on the Hollywood Walk of Fame in a ceremony that drew such a large crowd it forced a shutdown of a stretch of Hollywood Boulevard. (Photo: SkyFOX)

"I think I speak for the entire city of L.A when I say we've always known Hussle was destined for greatness," London told the crowd. "This moment only amplifies that for us. 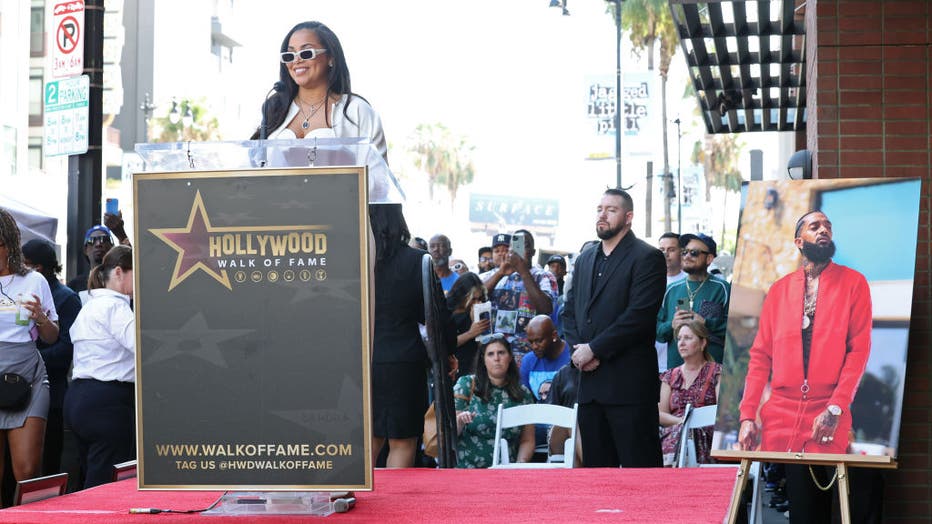 Lauren London speaks onstage as Nipsey Hussle is posthumously honored with a star on The Hollywood Walk of Fame on August 15, 2022 in Los Angeles, California. (Photo by Phillip Farone/Getty Images)

"Nip would have been honored by this moment," she said. "I think he would want everyone to remember that you cant get to what's possible unless you commit to moving forward. That doesn't mean forgetting where you come from, but it requires acknowledging the reality you were born into and the power you have to change that reality for the better.

"So whenever you're in the City of Angels and you see this star, I hope it encourages you to break away from whatever might be holding you back and for you to run your marathon until God says that it's finished."

"But proud is an understatement," she said. "Nip the great, look at who you are, look at what you did. I'm in awe but I'm not surprised. You've been a star in my eyes, the family's eyes, God's eyes, far before the accolades caught up. You've affected the lives of so many in the realist ways -- the realist ways, the realist ways. You've been a pillar in our family, in the community. ... I've always been amazed and impressed at the example that you set. I feel so blessed and grateful to call you my brother." 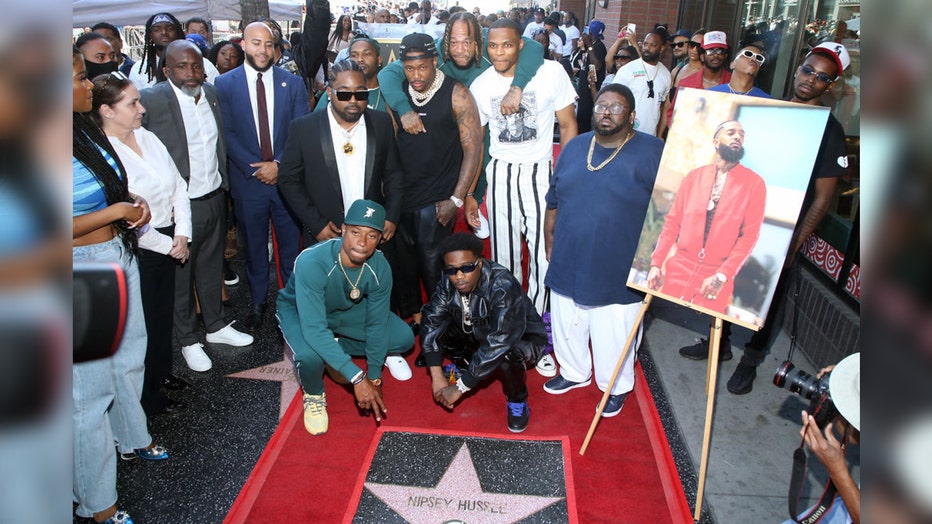 (L-R) Isiah Thomas, YG, Roddy Ricch, and Russell Westbrook are seen as Nipsey Hussle is posthumously honored with a star on The Hollywood Walk of Fame on August 15, 2022 in Los Angeles, California. (Photo by Phillip Faraone/Getty Images)

In accepting the honor on her grandson's behalf, Boutte said Hussle "will never be gone in my heart."

"He lives forever," she said. "And I look at his picture and remember all the wonderful times we had together. Nipsey, I love you, I miss you, but you're close at heart always. God bless you. God bless everyone." 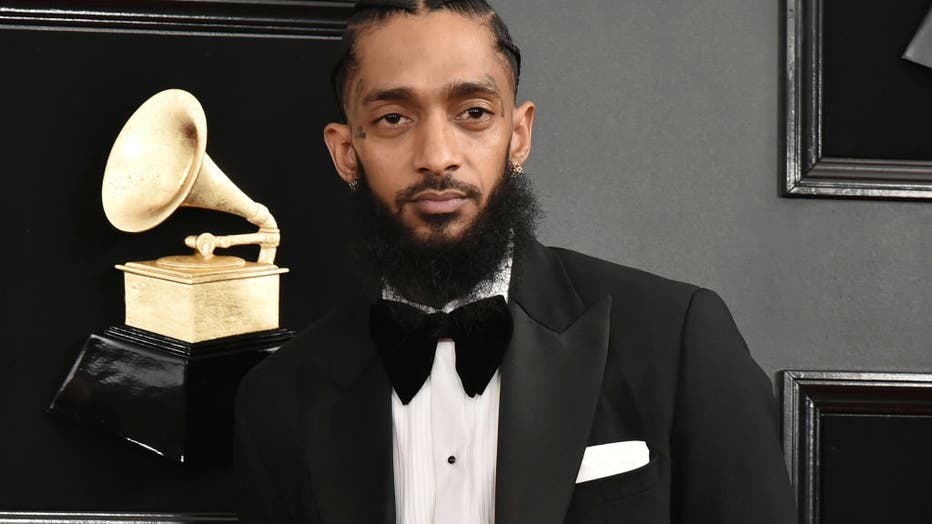 Born Ermias Joseph Asghedom on Aug. 15, 1985, Hussle transformed himself from a South Los Angeles gang member to a rap musician and channeled his success into efforts to help others stay out of gangs. He bought shoes for students, re-paved basketball courts and provided jobs and shelter for the homeless.

Hussle helped renovate a Mid-City roller rink and redeveloped the South Los Angeles strip mall that housed his The Marathon Clothing shop where he was shot and killed March 31, 2019.

After Hussle's death, thousands of people were on hand in April 2019 for a service in his honor, with singer Stevie Wonder and rapper Snoop Dogg among those paying tribute to him.

In a letter that was read during the service, former President Barack Obama wrote, "While most folks look at the Crenshaw neighborhood where he grew up and see only gangs, bullets and despair, Nipsey saw potential. He saw hope. He saw a community that, even through its flaws, taught him to always keep going."

Eric Holder Jr., 32, was convicted of murder in July for killing Hussle. He was also convicted of two counts each of attempted voluntary manslaughter and assault for injuring two other people. He is tentatively set to be sentenced Sept. 15.