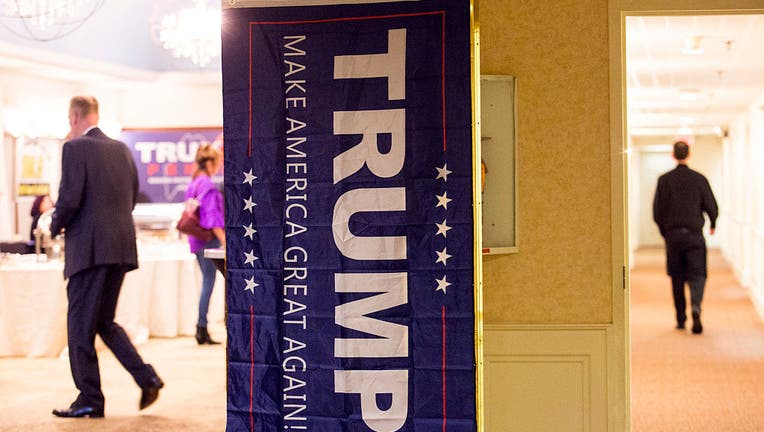 FILE - Folks begin to show up at the Mainers for Trump party at the Portland Regency. (Derek Davis/Portland Portland Press Herald via Getty Images)

OMAHA, Neb. (AP) - Nebraska will never be mistaken for a swing state given that it hasn’t supported a Democratic presidential candidate since 1964, but if the race is close this fall, the state could have a key role in choosing the next president.

It’s all thanks to a law approved decades ago that was intended to attract presidential candidates to a state they usually ignore because it’s so reliably conservative. While the statewide vote will clearly go to President Donald Trump, former Vice President Joe Biden has a good chance of winning in the state’s 2nd Congressional District, meaning one of Nebraska’s five Electoral College votes could go to the Democrat.

But there’s a problem with that scenario: Maine.

Maine is the only other state that awards Electoral College votes by congressional district, and it could go the opposite way and award a vote to Donald Trump even as the state as a whole likely will go to Biden.

“I wasn't aware of that,” Shirl Mora James, a leader in the Nebraska Democratic Party, said with a sigh. “I've been working the phones in Pennsylvania. Maybe I need to be making calls in Maine.”

Although Nebraska and Maine take the same approach to awarding Electoral College votes — two votes for the overall winner plus votes for the winner of each congressional district — they had different motivations for their laws.

In Maine, legislators approved the new approach in 1969 in hopes of better representing voters who might be on the losing end of the statewide count but were still a substantial minority.

Nebraska arrived at the same system more than 20 years later, but lawmakers focused more on gaining the attention of presidential candidates. A Democratic legislator, DiAnna Schimek, recalled Democratic presidential candidate Bobby Kennedy’s 11-city whistle stop campaign across the state in 1968 and convinced enough Republicans that by changing the Electoral College system, the state could return to relevance.

“That was when Nebraska mattered,” Schimek reminisced recently.

Or as longtime Democratic activist Patricia Zieg put it, without Nebraska’s current system, “We’d just be a warm North Dakota.”

After the first presidential debate was panned so widely that organizers introduced a mute button, Thursday’s second and final debate between President Donald Trump and Democratic challenger Joe Biden was far more civil.

While they share the distinction of potentially going against their statewide votes, the Maine and Nebraska districts are decidedly different.

Maine’s sprawling 2nd District is among the nation’s largest and most rural, made up of small farms, coastal communities and vast stretches of forest. It’s nothing like Nebraska’s tightly packed 2nd District, which stretches from Omaha’s century-old urban neighborhoods and trendy downtown lofts through suburban developments and finally ends about 20 miles west in hobby farms and cornfields. The Nebraska district also dips south to older suburbs near Offutt Air Force Base.

The differences help explain why the two districts could favor opposing candidates.

A big reason for Biden’s strength in polls is his support among urban and suburban voters. Polling indicates Biden has a slight lead in the Nebraska district despite trailing badly statewide.

In a sign the president's campaign has noticed those polls, Trump plans to hold a rally Tuesday at the Omaha airport.

In Maine, the more urban 1st District, anchored by liberal Portland, is strongly Democratic, but the 2nd District is far more favorable to Trump. Polls have shown Biden and Trump in a tight race there.

In 2016, Trump managed to collect a single electoral vote in the 2nd District while Democrat Hillary Clinton took the state's other three.

During this election cycle, Trump visited Maine in June to talk to fishermen and visit a factory that makes swabs critical to COVID-19 testing. Both of his sons have paid visits to Maine, too, along with Vice President Mike Pence, who paid a visit on Monday.

“It’s on, Maine. And the road to victory runs right through northern Maine,” Pence told a gathering in Hermon, in the 2nd District.

Nebraska Republicans were embarrassed when Democrat Barack Obama won the 2nd District's electoral vote in 2008 and changed the district’s boundaries in 2011 to siphon off Democratic votes and avoid a repeat.

The state GOP also has called for the return of a traditional winner-take-all Electoral College system. But until then, Theresa Thibodeau, chairwoman of the Douglas County Republican Party, said she has used that vote for Obama as motivation for her follow Republicans.

“I think it was an eye-opener for a lot of people,” Thibodeau said. “Quite honestly, I think a lot of Republican voters stayed home because they thought Nebraska would stay red."

Fred Conley, a former Democratic city councilman who is running for the Nebraska Legislature, said it’s clear that the competitive race in the district has generated more excitement and organizing by party activists.

And that, Schimek said, is why she pushed for the change so many years ago.

“I wanted to give people a feeling that their vote really counted,” she said.

Associated Press writers David Sharp in Portland, Maine, and Margery A. Beck in Omaha, Nebraska, contributed to this report.