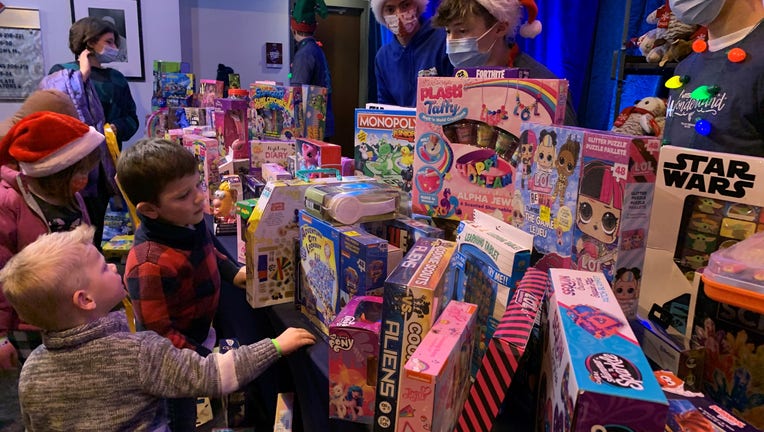 WASHINGTON (FOX 5 DC) - Parts of Nationals Park transformed into a winter wonderland to serve up some early holiday cheer for 300 military children in the DMV.

"Basically anything and everything a kid could dream of or think of!" said Emma Dockery, founder of Yellow Ribbons United.

The D.C.-based non-profit is joining forces with local companies to say thank you to our nation’s heroes and their families.

Marine Corps wife Jessica Rudd says it's an important event for children like hers, who may have a parent deployed.

Rudd's husband recently returned from Afghanistan and is currently stationed at Camp Lejeune in North Carolina.

When it comes to how she’s feeling now that dad’s home, Aubrey Rudd says it best.

"I’m very glad that this year we will get to spend time together and hopefully this will be the last time he will be deployed ever again and we’ll have to spend the holidays separated."

Dockery says it takes a village to put together the Christmas spectacular for these families – nearly 60-thousand dollars in funding and donations.

Coming from a military family herself though, Dockery knows all too well the sacrifices these kids make.

"I think really the heart of this is to give families that tangible memory so that you have something to hold on to as you get older that you remember," she said. "Yes there was sacrifice and moving all around the world but at the same time there were great people along the way that really made it special for us and that’s kind of our heart is to really make it special for these families."

Despite all the toys and treats, the best gift of them all?

"The fact that they’re able to put this on again, that my husband’s home…. that’s really the best gift we could get this year," said Rudd.