PHILADELPHIA - Washington Nationals pitcher Max Scherzer returned to the mound to face the Philadelphia Phillies on Tuesday night after a stint on the injury list and didn't appear to be pleased with baseball's constant grip-enhancing substance checks.

After the first inning, Scherzer was subjected to a mandatory check from umpires in accordance with Major League Baseball's new guidance. Scherzer was not looking thrilled as he stopped by the third base line to let umpires check out his hat and glove.

The night of checking Scherzer wasn't over. 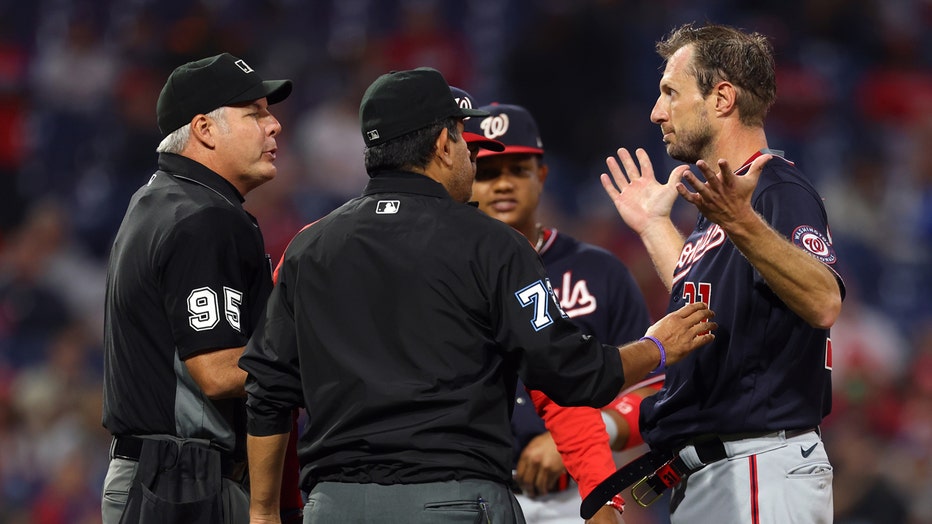 Pitcher Max Scherzer #31 of the Washington Nationals is inspected by umpires Tim Timmons #95 and Alfonso Marquez #72 for a sticky substance during the fourth inning of a game against the Philadelphia Phillies at Citizens Bank Park on June 22, 2021 in

Phillies manager Joe Girardi asked umpires to check Scherzer in the middle of the fourth inning after nearly hitting then striking out Phillies batter Alec Bohm. That's when the pitcher threw down his hat and glove onto the field and loosened his belt nearly taking his pants off so the umpires can really get in there.

Scherzer gave Girardi a death stare after the inning was over. Girardi then came out of the dugout to seemingly call Scherzer over to him. Girardi was then ejected.

"These are Manfred rules," Scherzer said after the game referring to MLB Commissioner Rob Manfred. "Go ask him what he wants to do with this."

Girardi asked for a check on Scherzer after he saw the pitching touching his hair. Girardi said it looked "suspicious" to him.

"I would have to be an absolute fool to actually use something tonight when everybody's antenna is so far high they'd look for anything," Scherzer said. "I have absolutely zero on me. I have nothing on me. Check whatever you want. I'll take off all my clothes if you want to see me."

Scherzer said he lost his grip when he nearly struck Bohm in the head.

"I almost put a 95 mile an hour fastball in his head because the ball slipped out of my hand. The whole night I was sick of kind of licking my fingers and tasting rosin the whole night," Scherzer said.

Girardi explained that he wasn't trying any sort of comeuppance when asking umps to check out Scherzer.

"I'm not playing games, I'm trying to win games here. I have respect for what Max has done in his career, but I have to do what's right for our team," Girardi said.

The Nationals won the game, 3-2. It was Scherzer's first start since suffering a groin injury. He had eight strikeouts in five innings. He allowed one run on two hits and walked three batters.

"Hopefully the players across the league understand that what we're doing right now, this is not the answer. There is a problem with Spider Tack in the game and we've got to get rid of that, but I also think there's a way to handle this in a better way," he added.

"We're going to continue to have more events like this happen. As pitchers evolve to this, pitchers aren't going to be too happy doing this because we're trying to play by the rules."