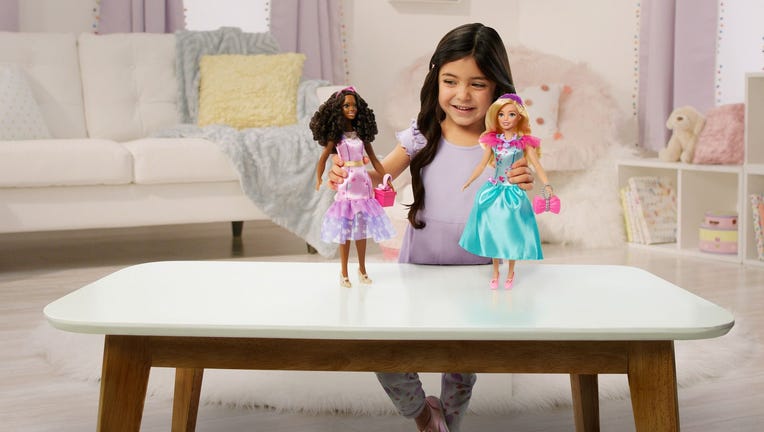 NEW YORK - Love her or loathe her, Barbie has been transformed again, this time into a version for children as young as 3.

Gone is the contentious hourglass figure for My First Barbie, which launched Thursday ahead of July's live-action film about the icon starring Margot Robbie and Ryan Gosling.

The slightly softer-bodied Barbie follows on the high heels of tall, petite and curvy iterations that were released five years ago in a massive makeover.

My First Barbie is 13.5 inches tall, 2 inches taller than traditional Babs, with a larger waist that de-emphasizes the bust line (it remains in place, however), and flesh-tone modesty undergarments permanently attached.

Her fashion is more kid-like, with playful heart, star and flower designs on jammies and flouncy preschool-friendly dresses and swim gear. Her accessories are larger for littler hands, and her hair is extra long for easier brushing.

My First Barbie's limbs are moveable, like some past versions of the doll, and her facial features remain recognizable. A huge milestone: Her fingers and thumbs are connected, eliminating a frequent complaint that Barbie's hands get caught in her clothes when children try to put them on.

Lisa McKnight, a Mattel executive vice president and global head of Barbie and dolls, told The Associated Press the company created the new version in response to feedback from parents.

"We talk to parents and kids almost 365 days a year," she said. "We started hearing a theme around younger kids wanting to play with Barbie. Parents were concerned that their children at the preschool age didn’t have the fine motor skills to have a positive play experience with our traditional fashion doll."

My First Barbie’s fashion is more kid-like, with playful heart, star and flower designs on jammies and flouncy preschool-friendly dresses and swim gear. Her accessories are larger for littler hands. (Credit: Mattel)

Critics of 63-year-old Barbie, intended to symbolize a girl in her late teens, have long cited her dimensions as promoting unattainable, sexualized body standards for girls. My First Barbie, at a price point of $19.99, goes a long way in eliminating that issue.

McKnight wouldn’t directly address the criticism or whether My First Barbie has a place in turning around that negative view.

Research is mixed on whether Barbie's bad rap on body issues and her adult-leaning fashion sense have any impact on children, said Jody LeVos, once a leader of Mattel's child development and learning team and now chief learning officer for Begin, a company that creates learning apps and other educational fare for kids.

Among parents, she said, "there's a big nostalgia factor" when it comes to Barbie.

The Barbie line’s overall sales have soared in recent years after a period of decline in 2013.

"If we’re going to think about Mattel guiding our choices then we have already kind of limited them," she said.

McKnight made it clear that My First Barbie will not be a separate, parallel Barbie universe. She said new content featuring the doll will hit Barbie's YouTube channel later this month, with an animated special about the planning of a surprise party.

Andrea Werner, a pediatric occupational therapist in West Hartford, Connecticut, and mother of a preschooler and an infant, supports doll play as developmentally valuable.

"There are plenty of dolls on the market," she said. "Companies will always be trying to sell consumers the next best thing."

Mattel unveiled its first-ever Barbie doll with behind-the-ear hearing aids, a doll with a prosthetic leg and even a Ken doll with vitiligo as part of the Fashionistas doll collection.

Kohchi isn't entirely sold on My First Barbie as appropriate.

"We know that if you’re going to hand a child an image and say, this is beauty or this is wonderful or look how pretty that is, it should resemble the child a little bit more closely," she said. "It’s certainly still a little older than a preschooler."