Calls for equity as more COVID-19 vaccines arrive in Maryland

FOX 5's Melanie Alnwick reports from Montgomery County where some local leaders are concerned about a racial divide when it comes to who is receiving COVID-19 vaccines.

At issue is racial equity. Council members and county health officials believe the state’s method of priority distribution is better than what they call Maryland’s "first-come, first-served" system.

"Governor Hogan, who I’m sure has aspirations to do a number of things, continues to make sure that when it comes to giving vaccine to public health entities throughout the state that have shown that they are committed to equitable distribution, has decided to take it away from them and give it to folks who don’t have that commitment nor have a plan on how to make that happen," Councilmember Craig Rice said.

"We should not be afraid to speak out about the policies that are coming from Annapolis for fear that there may be ramifications ... we may not get a mass vax site because we are critical of the governor. Some may argue that may be what’s happening now, quite frankly. But at the end of the day it’s about accountability and leadership," Gayles said.

"Maybe the state should be coming to us and asking us some questions about how we are doing it effectively instead of just having these hypotheses about how they can do it more effectively," Director of Emergency Management Dr. Earl Stoddard said.

Council President Tom Hucker weighed in on a discussion of Acting Health Secretary Dennis Schrader, saying, "I think many of us...would like to see Governor Hogan put forward a nominee who shows more of an understanding."

The data from Montgomery County may be illuminating:

- Minorities make up 57% of Montgomery County’s population - yet account for 47% of those who have been vaccinated so far. (As of this writing, 161,337 county residents had a first dose, and 79,902 are fully vaccinated.)

- White residents are 43% of the population, and have received 53% of the vaccines.

- The disparity is especially deep in the Hispanic community, which is 20% of the population, but has only an 8% share of those vaccinated.

Gayles said the gap is closing, in part, because of their equity distribution framework.

What does that mean?

Unlike Fairfax County, which gave people a "place in line" according to the date they signed up, there is no "line" in Montgomery County. The county provided a rare glimpse into its own process in the meeting.

When a resident pre-registers in the county, it appears everyone goes into a large pool, though divided by eligibility phases and tiers.

Within those phases, the county makes offers of vaccine appointments based on high impact zip codes, then adds race and ethnicity to the formula. FOX 5 is looking into whether or not names are generated by algorithms, or chosen by health department employees.

There is a racial gap in pre-registrations too. Predominantly White residents have pre-registered, while the rest of the group is 15% Asian, 9% Hispanic and 8% Black.

Dr. Raymond Crowel, Director of the Department of Health, said minority groups need to be in that pool in order to get priority, but added that the county can’t hold onto vaccine and wait for them.

Access to technology, transportation, time to hunt for appointments and get to them, as well as trust of the vaccine are some of the reasons Gayles gave for that disparity. The health department is partnering with faith communities to get more minorities pre-registered. Large-scale vaccination clinics are now open in high-impact areas.

"We don’t want black and brown people to be the last vaccinated in this county." Crowel said. "Our commitment is to do this in an equitable way that gives them a chance get them into a system that guarantees at some point they will have a dose with their name on it that won’t be stolen because somebody came along and pre-registered on a first-come first-served basis"

Many people who have been vaccinated so far have secured appointments at the state-run mass vaccination sites and local pharmacies. It’s no secret that those with the fastest computer skills get the appointments first - leading to some to make "Hunger Games" comparisons.

Councilmember Evan Glass and others want the council to pressure private pharmacies – which get their doses from the Feds - to adopt the county’s equity distribution framework.

"Let’s call out what we’re seeing", added Councilmember Rice. "Our private provider pharmaceutical companies are out there doing whatever they want, it’s the ‘Wild Wild West’ in terms of dissemination of vaccine. We’ve seen them pull from vulnerable neighborhoods and take it to more affluent neighborhoods - and that is shameful."

One might ask if there isn’t room for both systems. After all, every person who successfully makes an appointment with a state or federal partner frees up a spot in the pre-registration pool.

There are also questions about whether an entire distribution system based solely on the county’s prescribed formula could disenfranchise vulnerable people who don’t live in priority zip codes.

Take a look at this map presented at the meeting. 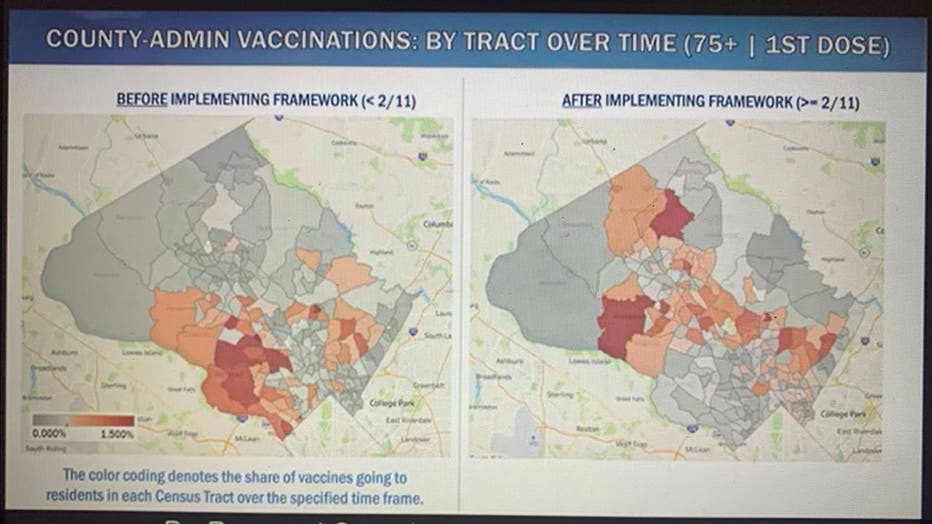 The map above shows where the county has distributed its doses - before and after the equity formula was applied.

Of concern are those parts of the county in dark gray – that signifies 0%, none.

FOX 5’s Melanie Alnwick has reached out to the Health Department for clarification regarding that statistic.

So, if those residents weren’t able to access vaccines at state clinics and federal partners - where would they go? It was also county leaders who urged residents eligible in the state tiers to use the hospital and pharmacy systems instead of the county clinics.

Councilmember Will Jawando is exploring whether it’s legal to give priority to Black 45-54 year olds above all 65+ residents - because he says data shows that group is dying from COVID-19 at a greater rate.

"We need to do this", he implored. "This is a step we can take. It’s not without risk but we know there’s a ton of risk and death with everything we’re seeing."

Councilmember Hans Riemer crunched some numbers and predicts a "huge surge" in vaccinations. He believes, based on pledges from the manufacturers, Montgomery County could get upwards of 450,000 doses in four to five weeks. That would make the vaccine available to private physicians who can distribute to patients in their offices, and shift the Health Department focus to communities who don’t have access to the other options.