Montgomery County&nbsp;Executive Marc Elrich is calling on Maryland's Governor Larry Hogan to create a mass vaccination site in the county. He says if the state doesn’t do it, Montgomery County might go it alone.

SILVER SPRING, Md. (FOX 5 DC) - Montgomery County Executive Marc Elrich is calling on Maryland's Governor Larry Hogan to create a mass vaccination site in the county. He says if the state doesn’t do it, Montgomery County might go it alone.

In 2020, strained relations between Hogan and Elrich moved Bethesda Magazine to name "Elrich vs. Hogan" the 2020 Feud of the Year. On Wednesday, Elrich was again critical of Hogan for a lack of a mass vaccine site in Montgomery County but insisted their history of political disputes has nothing to do with it.

READ MORE: Three more mass vaccination sites to open in Maryland, except not in Montgomery County 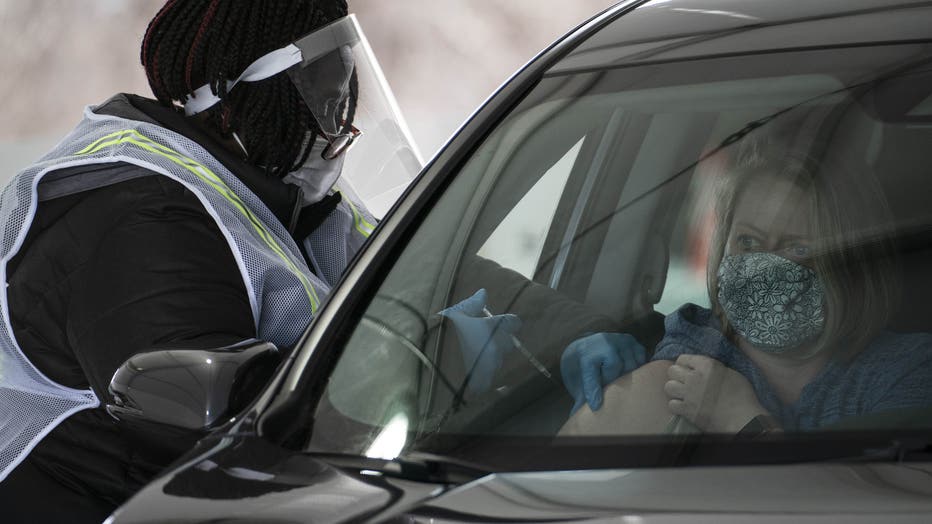 A woman is injected with the coronavirus vaccine in the parking lot of Six Flags America on February 6, 2021, in Bowie, Maryland. (Photo by Sarah Silbiger/Getty Images)

Elrich and Hogan's differences boiled over even before COVID-19.

In the past, the Democratic county executive and the Republican governor have clashed on things like the meaning of the "Blue Lives Matter" flag to the widening of I-270 and the Legion Bridge to recently clashing over reopening private schools in Montgomery County, as well as restrictions on reopening businesses during the coronavirus pandemic.

Today, Elrich also criticized the governor over a lack of a single statewide vaccine registration system. Criticism the governor says he’s heard before but he says misses the point because the problem is a lack of vaccine.

State officials point out that just because a mass vaccination site is located in one county, it’s not just limited to residents of that county. Elrich acknowledged that today.

Governor Hogan says the main focus right now is making sure vaccine distribution is equitable, and tomorrow, he will hold a briefing to detail plans for underserved communities.