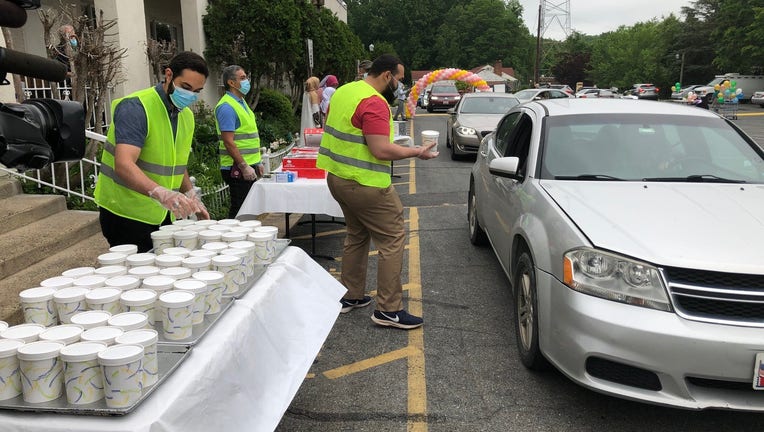 Islamic Education Center in Potomac hosted a drive-through Eid al-Fitr, or the breaking of the fast of Ramadan.

POTOMAC, Md. - Hoping this will help give members the fuel to push through these difficult times, volunteers at the Islamic Education Center in Potomac decided to host a car parade in celebration of Eid this year.

Eid al-Fitr is the Muslim holiday marking the end of Ramadan, the month of reflection, prayer and fasting from sunrise to sunset.

It’s one of the holiest times in the Muslim calendar.

Volunteers at Islamic Education Center greeted drivers with masks and gloves on Sunday while handing out a traditional meal some spent all night preparing.

They also hired circus-style performers and gave goodie bags to the children.

One volunteer, Maryam Jelvani, says the kids are why they decided to hold a car parade, but the adults were just as happy as the kids Sunday.

“It’s really exciting because all of Ramadan, we have not had a chance to really see any community members. So it’s really befitting that on the day of Eid we’re able to all get together finally. It really makes it a nice celebration,” Jelvani said.

“This is something. It’s not exactly what we had hoped for but I still get to see few familiar faces from afar. From inside my car,” said Ali Saboori.

“I’ll have something to tell my kids in the future that we once had a Ramadan that we were never able to physically be around one another,” said Saboori, who also said it makes him appreciate the past that much more.

Located in Montgomery County, the Islamic Center Mosque is still closed for worship and other services are being streamed.

Masjid Mohammad in Washington D.C. was also planning a car parade to mark Eid. Several other Mosques in the area are streaming their celebrations under the circumstances.

Reza Baghaee-Rezaee, an Islamic Education Center Youth Coordinator, told FOX 5 the Islamic Center has also been providing meals to the community during this time of lockdown.