Extra monkeypox vaccines going to gay pride events across US

CDC officials discuss the latest steps to mitigate monkeypox in the US ahead of gay pride events in several cities.

The U.S. is setting aside an extra 50,000 doses of monkeypox vaccine for places with upcoming gay pride events, health officials said Thursday.

The number of doses sent to each will be based on factors like the size of the event, how many health workers will be available to give shots, and how many of the attendees are considered at highest risk for catching the virus.

"More shots in arms is how we get the outbreak under control," Bob Fenton, the White House monkeypox response coordinator, told reporters Thursday. He said the effort is an attempt to "meet people where they are."

At least a dozen U.S. pride events are scheduled over the next two months, including large gatherings in Atlanta and New Orleans in early September. U.S. officials said they will send up to 2,000 additional doses to North Carolina, where the Charlotte Pride Festival & Parade will be held this weekend.

Monkeypox is endemic in parts of Africa, where people have been infected through bites from rodents or small animals, but it wasn't considered a disease that spreads easily among people until May, when infections emerged in Europe and the U.S.

There have been more than 39,000 cases reported in countries that have not historically seen monkeypox. The vast majority have occurred in men who have sex with men, but health officials stress that anyone can get monkeypox.

RELATED: Monkeypox: What you should know as U.S. declares public health emergency

The U.S. has the most infections of any country — more than 13,500. About 98% of U.S. cases are men and about 93% were men who reported recent sexual contact with other men.

Officials say the virus has been spreading mainly through skin-on-skin contact, but they warn it might also transmit in other ways, including through touching linens used by someone with monkeypox. 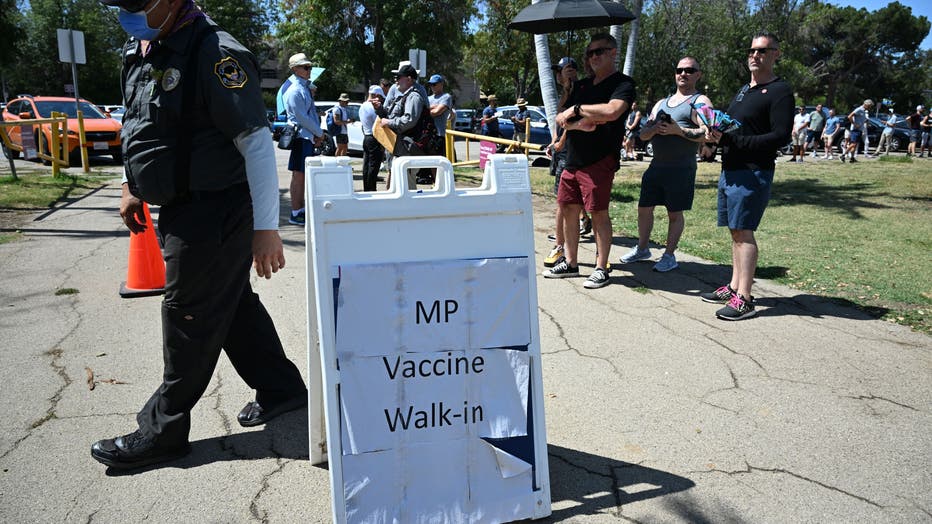 People wait in line to receive the monkeypox vaccine at the Balboa Sports Center in the Encino neighborhood of Los Angeles, California, on July 27, 2022. (Photo by ROBYN BECK/AFP via Getty Images)

People with monkeypox may experience fever, body aches, chills and fatigue. Many in the outbreak have developed extremely painful zit-like bumps. No one in the U.S. has died, but deaths have been reported in other countries.

The U.S. has a limited supply of what is considered the main weapon against the virus — a vaccine called Jynneos. The doses are currently being given to people soon after they think they were exposed. Scientists are still trying to establish how well the shots are working.

The government last week moved to stretch the supply by giving people one-fifth the usual dose, injected just under the skin, instead of a full vial injected into deeper tissue. Officials this week announced the release of 442,000 of the smaller doses for order by state, local and territorial health departments. On Thursday, they said more is coming next week — 1.8 million doses, or 360,000 vials.

Many health workers may have little experience giving shots using the just-under-the-skin method, which requires different needles and syringes. Some health departments and health centers, including in Atlanta and Los Angeles, have begun giving monkeypox shots in that manner, U.S. officials said. But some local officials have said they may need a week or more to make the change.

Also on Thursday, health officials said next week they will boost the supply of TPOXX, a drug for treating monkeypox infections, by 50,000 treatment courses.