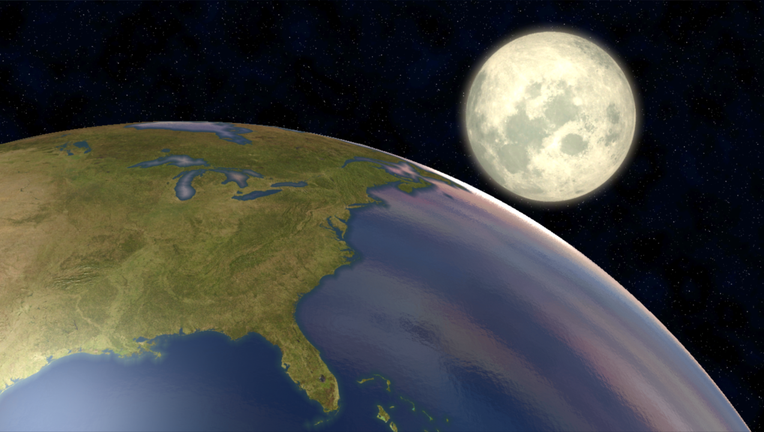 WASHINGTON - Are you under the age of 68? Then prepare to see something that you have never experienced in your lifetime come Monday morning: an extra special supermoon!

Here are five things you need to know about this incredible celestial event:

1. It's the biggest moon since the 1940s.
Since January 1948, in fact. Remember that a supermoon occurs when the moon is in its full phase while also passing by earth at the closest point during its orbit around the earth. This one is special because of how close the moon will be to the earth as it passes. The moon will pass at a distance about 221,523 miles. That's about 8 percent closer to earth than it normally is, but also the closest the moon has been since the day that it was 29 miles closer in January 1948.

2. Going to miss it? See ya in 18 years…
Every year brings the opportunities for supermoons, all of which tend to be bright and brilliant. But those extra special ones-- like the one happening early Monday morning-- do not happen so often. In fact, if you miss it, NASA says you will have to wait another 18 years before you can catch another that's just as brilliant. In 2034, the moon will actually come about 38 miles closer to the earth than on Monday, and it will also be a supermoon! Mark your calendars.

3. Mother Nature should behave... at least on Sunday.
Crystal clear skies? You bet! Sunday should bring beautiful weather and Sunday night will offer the best chance to see the supermoon in all its glory. Nearly 15 percent bigger and up to 30 percent brighter than the average full moon, it will light up the night sky like a spotlight on Sunday night.

The moon itself rises at 4:43 pm Sunday but will not be completely 100 percent full (only 99.6 percent to be exact) until just after 8 am on Monday morning. This is a bit of a problem, since the moon sets on Sunday morning at 6:36 am. Regardless, viewers will not be disappointed by the sights on Sunday night. It will be chilly though, so bring a jacket!

The supermoon will again rise on Monday evening at 5:30 pm, but there is a pretty decent chance that some clouds and maybe even some showers will disrupt the view. Sunday is the much better night for viewing.

4. Super Beaver Moon
A full moon in November is sometimes referred to as a "Beaver Moon," taking this name from the olden days when it was considered the final chance for hunter to lay their traps to ensure a good supply of warm furs for the winter. It has also been referred to as the Frosty moon, as it is taken as a sign of more frequent frost and the end of the growing season.

5. Still another supermoon to go!
Going to miss the moon on Sunday? Well don't despair. Another supermoon awaits in December! This one just will not be as close-- about 1,000 miles farther away from Earth than Sunday's will be. The December supermoon might not be as welcome as its November cousin either, at least not for fans of the annual Geminid meteor shower. Due to its expected brightness, it is expected to obscure the meteor shower this year and make it extremely difficult to see.

If you miss this supermoon, then you'll have to wait awhile to see another. The next supermoon is not until December 3, 2017-- and it's the only supermoon of next year!