WASHINGTON - With 8 seconds left in the first half and the New Orleans Saints at midfield, Washington defenders had no idea a Hail Mary throw was coming from Jameis Winston.

It was so unexpected, no one jumped except for Marquez Callaway, who came down with the ball for the Saints touchdown.

"We weren't prepared for that," safety Landon Collins said.

A lack of preparation and a handful of blown coverages contributed to Washington's 33-22 loss Sunday, another rough defensive performance for a unit that has underachieved on expectations. The Saints finished with 369 yards and had scoring drives of 75, 60 and 75 yards to go along with the one-play Hail Mary possession.

"Those are tough because then you go into halftime and everyone's reliving it for the next 10 minutes," defensive tackle Matt Ioannidis said of the Hail Mary. "This (loss) is certainly going to sting a little bit." 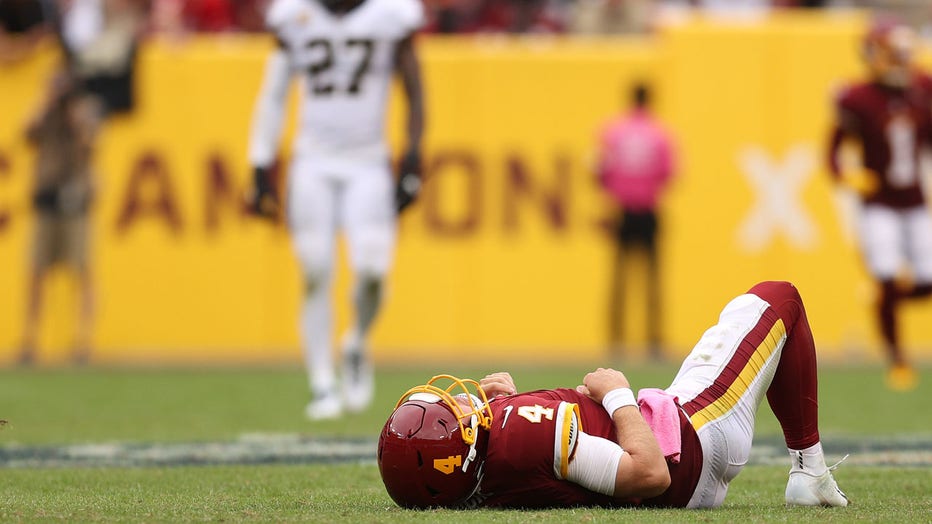 Taylor Heinicke #4 of the Washington Football Team reacts during the second half against the New Orleans Saints at FedExField on October 10, 2021 in Landover, Maryland. (Photo by Patrick Smith/Getty Images)

Washington defenders insisted they were turning the corner after a victory last week in a 34-30 shootout in Atlanta that could be credited to quarterback Taylor Heinicke and the offense. Things started better this time with Cole Holcomb picking off Winston early: the first time Washington did not allow its opponent to score on the opening drive.

A few minutes later, Winston connected for 72 yards and a touchdown with Deonte Harris, who was wide open.

"No one was in the middle of the field but Deonte and that ball," Winston said.

Each Saints touchdown was an indictment of Washington's defense, which finally got some pressure with the pass rush and Chase Young picked up his first sack of the season.

Winston's second TD pass to Callaway was a simple pitch and catch with no defenders nearby, and his throw to Alvin Kamara that turned into a 19-yard score was a product of the Saints finding and exploiting a hole in Washington's coverage.

The Hail Mary was the most embarrassing play for Washington's defense, which entered as the fourth worst in the NFL. Cornerback William Jackson said the Saints "did the right play at the right time."

Now, Washington needs to right the ship defensively with Patrick Mahomes and the Kansas City Chiefs in town next week and Aaron Rodgers and the Green Bay Packers on the road after that.

Coach Ron Rivera said he and his staff need to do a better job of putting players in a better position to succeed, but at some point the personnel on the field is at fault. That's clear after the loss to the Saints.