The meteor shower is expected to peak on the mornings of May 5 and 6, 2020, but will also coincide with a supermoon on May 7.

GENESEO, N.Y. - The Eta Aquarids meteor shower, caused by particles from Halley’s comet, is expected to peak this week — but stargazers will have just a narrow window of time to catch the light show.

For those in the northern hemisphere, May is the best spring month to view meteor activity, according to the American Meteor Society, a nonprofit dedicated to meteor astronomy research and education.

The Eta Aquarids are “very active” in the first two weeks of May, but are only visible in the few hours prior to daybreak.

The meteor shower is expected to peak on the mornings of May 5 and 6, but will also coincide with a supermoon on May 7 — impacting visibility.

“The potential observer has the chance to view increasing Eta Aquarid activity by viewing when the moon is low in the sky up until the first light of dawn begins to interfere,” the American Meteor Society states on its website, adding that it will be best seen from a rural location.

To best view the meteors, stargazers should look toward the eastern half of the sky.

“You will see Eta Aquarid meteors shooting upward from the eastern horizon,” AMS writes. “These meteors are striking the Earth from a head-on position so they will be swift, often covering several tens of degrees in a split second.” 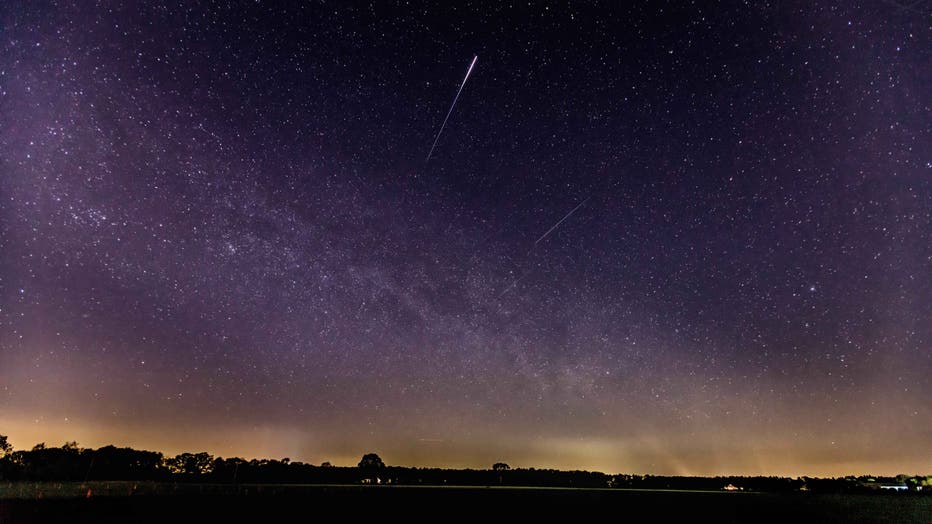 A meteor of the lyrids in the sky is seen on April 22, 2020 in Schermbeck, Germany. (Photo by Mario Hommes/DeFodi Images via Getty Images)

Remnants from Halley’s comet circle the solar system and encounter Earth twice each year in the form of meteors, Eta Aquarids in May and the Orionids in October.