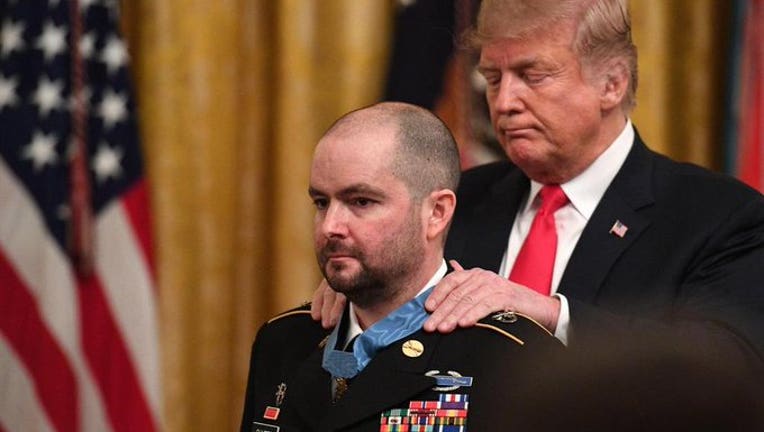 WINSTON-SALEM, N.C. - Former Army Staff Sgt. Ronald Shurer II, who received the Medal of Honor in 2018 for braving heavy gunfire to save lives in Afghanistan, has died of cancer. He was 41.

Miranda Shurer said her husband died Thursday in Sibley Memorial Hospital in Washington, D.C. She said he was diagnosed with cancer three years ago.

A native of Fairbanks, Alaska, Shurer was a senior medical sergeant in the special forces on April 6, 2008, when his team encountered machine gun and sniper fire and rocket-propelled grenades from militants.

Shurer stabilized one soldier, then fought his way amid gunfire up a mountain to the lead members of the unit. There, he treated and stabilized four more soldiers. Shurer helped evacuate them. He lowered the wounded down the steep mountainside while using his body to shield them from enemy fire.

After he had loaded the wounded in an evacuation helicopter, Shurer went back up the mountain to fight.

Initially rejected by the military because of a medical condition, Shurer successfully enlisted a year after the terrorist attacks of Sept. 11, 2001. He was promoted from sergeant to staff sergeant in late 2006 and served with the Combined Joint Special Operations Task Force in Afghanistan from late November 2007 to late May 2008. He was honorably discharged a year later.

“Today, we lost an American Hero: Husband, Father, Son, Medal of Honor Recipient - Special Agent Ronald J. Shurer II. From a grateful Nation and Agency — your memory and legacy will live on forever,” the U.S. Secret Service said in a tweet.

Miranda Shurer, citing restrictions from the coronavirus pandemic, said her husband will be buried in Arlington National Cemetery near the nation's capital at a future date.

In addition to his wife, Shurer is survived by two sons.