FOX 5's Stephanie Ramirez reports on the latest in the search for a suspect accused of carrying out an armed robbery at a McDonald's in Silver Spring, Maryland.

MONTGOMERY COUNTY, Md. (FOX 5 DC) - Montgomery County Police are asking for the public's help identifying an armed robbery suspect seen in surveillance video threatening employees with a knife, going behind the counter of a McDonald's and ripping out a cashier drawer.

The incident happened in the 8500 block of Colesville Road at McDonald's in Silver Spring around 12:15 p.m. on May 5.

Montgomery County Police are searching for a suspect in connection with a robbery that was caught on camera inside a McDonald's in Silver Spring.

Employees say it happened in the middle of the day with plenty of customers inside, and some feel that they got a second chance at life.

"My husband said, ‘God helped you because you like prayer. You like to go to the mass, go to the church. That’s why God helped you,’" said one McDonald's employee who asked not to be identified. 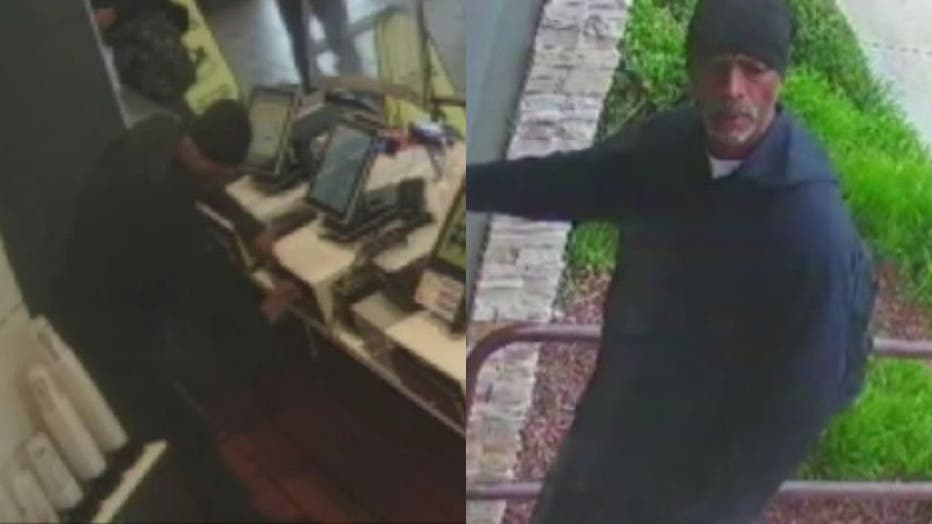 However, in the McDonald's security footage, you can see the man appearing to lift his shirt, trying to grab or show a knife. He then hops over a small wall to get behind the store's registers and with a knife, pries open a register drawer.

The suspect appears to cut some kind of cable and is then seen taking money.

Police say the man demanded money from the cashier. The worker told us in her six years, nothing as aggressive as this had ever happened while she was on the clock, and she is concerned that the suspect is still out there.

Police do not expect or advise witnesses to intervene in situations such as this. Police say they are grateful several customers did stay behind so they could give an account of what happened.

Even with the images provided of the suspect, no one has come forward yet – and there is a concern this could happen again.

The suspect is described as Black male, approximately 6-feet, 2-inches and 180 pounds. He was wearing a black winter hat, dark-colored hoodie, blue jeans and black boots.

A reward of up to $10,000 is being offered for information that leads to the arrest of the suspect. Callers may remain anonymous.