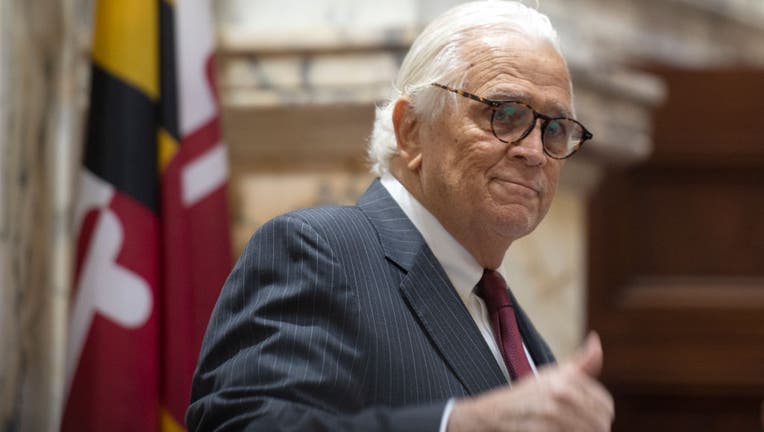 State Senator Thomas V. Mike Miller Jr. issues a statement that he has been dealing with prostate cancer in the senate chambers of the State House in Annapolis, Maryland on January 10, 2018. (Photo by Marvin Joseph/The Washington Post via Getty Image

WASHINGTON (FOX 5 DC) - Maryland Senate President Emeritus Thomas V. Mike Miller, Jr. passed away peacefully at his home Friday afternoon while surrounded by loved ones, according to a family statement. He was 78 years old.

Miller is survived by his wife, Patti, son Tommy, daughters, Amanda, Michelle, Melissa, and Melanie, sisters Susan, Cynthia, Melinda, Nancy, and Kim, brothers, Jonathan, David, and Mark, and his 15 grandchildren. He was predeceased by his sister Judith,.

The Maryland Democratic Party released the following statement after Miller's passing was announced:

"These past months have been filled with difficult losses, but the passing of longtime Senate President Mike Miller is one of the most heartbreaking. Miller was a titan of Maryland. In his five decades of service to our state – including thirty-three as Senate President – he fought for everyday Marylanders, improving the lives of so many through progressive, yet always pragmatic, policies. Our hearts go out to his family – we offer our deepest condolences. The people of Maryland are forever indebted for his service."

"Maryland has lost one of its most revered leaders, and I have lost a dear lifelong friend.

Serving the people of our great state was Mike Miller’s life’s work, and he did so with unrelenting passion and courage for a remarkable 50 years. Even as he waged a hard-fought battle with cancer, I was blessed to continue to benefit from Mike’s wisdom and trademark humor. He was, in every sense, a lion of the Senate.

The First Lady and I extend our most heartfelt condolences to President Miller’s wife, Patti, their five children and 15 grandchildren, his Senate colleagues, and all who loved him."

Hogan announced Maryland flags will fly at half-staff in honor of Miller’s "distinguished life and legacy until sunset on the day of interment."