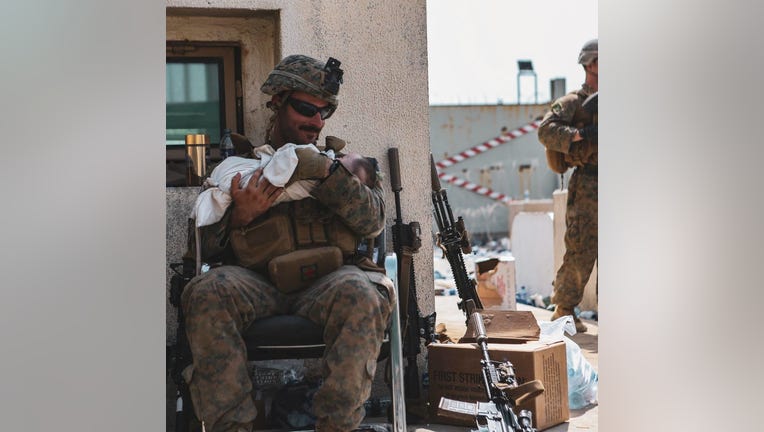 Marine and College Park resident Sgt. Matt Jaffe was recently seen in a photo that has now gone viral of him calming an infant during the evacuations in Afghanistan.

MORE FROM FOX 5: Taliban seizes Afghanistan: What happened and what could come next

The photo was posted on the U.S. Marine Corps Facebook page showing Jaffe and the child at Hamid Karzai International Airport in Kabul, Afghanistan on August 20.

The infant seen in the photo took a liking to Sgt. Jaffe after previously being with a female marine. Because of the connection the pair had, Sgt. Jaffe decided he would hold the infant during his off cycle.

EXCLUSIVE: FOX 5 speaks with Afghan refugees as they begin arriving in DMV

"I’m just a Marine, same as the men and women I serve beside, doing a job to try and help people and protect people," Sgt. Jaffe said. "It’s pretty grim out here and sad. I had an opportunity to show some humility and do something that was good for the soul. I’m not looking for fame or praise, I was just doing my job and doing what I felt was right. We’re all people at the end of the day."

The infant was later brought to a nearby hospital where they were able to locate the father.

Jaffe has continued to receive countless messages through Facebook messenger and his post has been shared over 16K times.