Governor Larry Hogan provides an update on the state's response to the COVID-19 outbreak - including the acquisition of tests from South Korea.

BALTIMORE, Md. - Maryland Governor Larry Hogan was able to celebrate a rare milestone in the state’s battle against COVID-19 on Monday – a victory.

And, according to the Governor, Marylanders have First Lady Yumi Hogan largely to thank for acquiring 500,000 test kits from South Korea – which were a product of what officials have dubbed “Operation Enduring Friendship.”

“Most importantly, I want to thank Maryland’s First Lady, my wife Yumi. She truly is a champion of this Operation Enduring [Friendship]. You may know her as the first Asian First Lady of Maryland, but she’s also the very first Korean First Lady,” Hogan said. 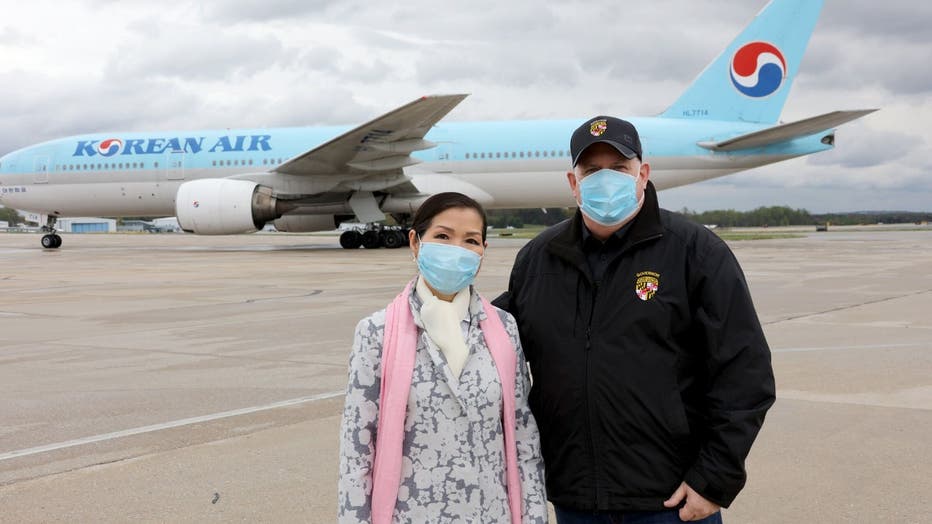 The novel coronavirus has ripped through the state – with more than half of the DMV’s cases identified among Marylanders.
And one of the highest hurdles Governor’s across the country say they’ve faced is a lack of adequate testing comparable to that of South Korea.

According to Hogan, Operation Enduring Friendship began on March 28 when he and First Lady reached out to the South Korean ambassador. Speaking in her native Korean, the First Lady asked South Korea for their help.

“We spoke of the special relationship between Maryland and the Republic of Korea and we made a personal plea in Korean asking for their assistance,” the Governor said on Monday.

According to Hogan, the call sparked 22 days of testing, vetting, and negotiations between Maryland scientists and officials and their counterparts in South Korea.

The governor said he considers the tests a crucial pillar in the state’s road to recovery from the pandemic – alongside a contact tracing operation, an increase in PPE supplies, and an increase in hospital surge capacity.

“But the most critical part of our recovery program for Maryland and the reopening guidelines that the President introduced on Thursday is the capability to do widespread testing,” the Governor said.

“The incredible success of operation enduring friendship has not only put us on track to achieve that goal, but it will literally help save the lives of thousands of Marylanders,” Hogan added.

Hogan said that with the success of the operation, Maryland is indebted to South Korea.

“My wife often says that she would not be here if it were not for the dedication and sacrifice of the brave Americans who fought for the freedom of South Korea,” Hogan said. “She and President Moon [Jae-In] have both talked about the incredible debt of gratitude that South Korea feels toward the American people. Let me just say that after Operation Enduring Friendship, the state of Maryland owes an incredible debt of gratitude to the people of South Korea.”