This year Somer Scandridge wanted Halloween to be extra special for her family, so she decided to surprise her daughter with a giant inflatable unicorn costume she impulsively purchased on Amazon.

This year, she wanted it to be extra special by surprising her daughter with a giant inflatable unicorn costume she impulsively purchased on Amazon.

She added that Halloween also happens to be her son’s birthday, so naturally she and her husband match costumes with their son and daughter — costumes they choose nearly five months in advance for the special occasion.

“This is probably our best costume choices yet!” said Scandridge joyfully. 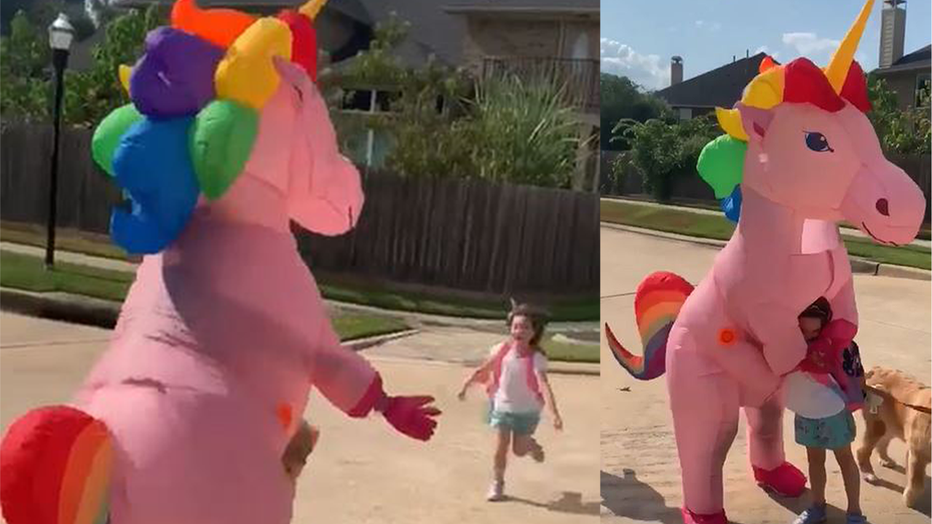 Somer Scandridge surprised her daughter by dressing up for Halloween early in a giant inflatable unicorn costume.

While Scandridge’s tradition is to match costumes with her daughter, they both will not be wearing matching inflatable unicorn outfits.

“She picked out some cute tutu getup,“ said Scandridge. ”I, however, did not get that. I found a costume that looked cute waddling down the street in and I didn’t have to do makeup and hair for,“ she added. "The rule is, I just have to match the character she picks... not the costume."

While there is still more than a month left until Halloween, Scandridge said her daughter is literally counting down the days with a calendar on their fridge that she marks off every morning adding that she’s “waiting for the night she gets to run down the street in her unicorn costume collecting full size candy bars and Reese’s Cups.”

Scandridge is excited too. She said she’s enjoying the tradition until her kids no longer want to go trick or treating with their parents.