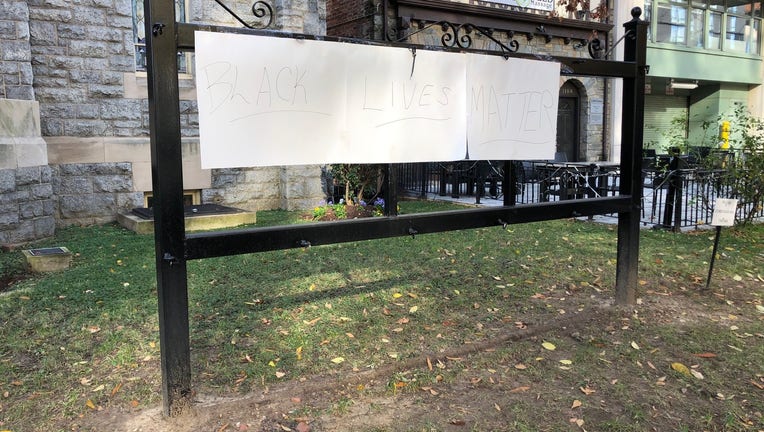 WASHINGTON - A DC pastor spoke out Sunday after watching far-right demonstrators vandalize property at a historic Black church in the nation's capital this week.

Those protesters vandalized two signs at the church.

One of them, a Black Lives Matter sign, was ripped down and burned as a crowd cheered around it.

Noting “an apparent rise in white supremacy,” Asbury’s lead pastor said she watched on Twitter as demonstrators who participated in Saturday’s MAGA gatherings destroyed the BLM sign. The demonstrators appeared to be Proud Boys members in video.

Several videos online, including one captured by Ford Fischer with News2Share.com, show some of what happened.

Fischer’s tweet from 1:15 a.m. Sunday morning, says, “The Proud Boys poured lighter fluid on the Black Lives Matter banner they looted from the nearby church and set it on fire.” “F--- antifa” and “USA” he quoted the group as chanting.

Mills compared the damage to Ku Klux Klan cross-burnings in a statement:

“For me it was reminiscent of cross burnings,” Rev. Mills shared in a statement, which goes on to read in part: “As horrible and as disturbing as this is for us now -  it doesn’t compare with the challenges and fears the men and women who started Asbury, 184 years ago, faced. so we will move forward, undaunted in our assurance that Black Lives Matter ...”

DC Mayor Muriel Bowser is among the public officials who condemned the attack:

FOX 5 on Sunday morning found three large pieces of white cardboard paper taped to the empty sign holder, with the words “Black Lives Matter” written in marker. There was also a poster with a message of solidarity affixed to the church’s front door.

FOX 5 found both a representative from the mayor’s office and police at the church on Sunday. Police are now investigating possible property damage and potential hate crime charges.

This is not the first time churches have been the target of vandalism this year. D.C. Police are investigating whether at least one other church’s sign was vandalized in the district this weekend.

Over the summer, rioters set the basement of St. John’s the Episcopal Church on fire. This was during the D.C. unrest that broke out during the George Floyd protests this past summer.

That church vandalism led to Pres. Trump's infamous tear-gassing of protesters at Lafayette Square so he could conduct a photo opportunity at the church.