President Donald Trump visited the 200-year-old church near the White House that was set on fire as demonstrators clashed with police over the weekend.

WASHINGTON (AP) - The bishop of the Episcopal Diocese of Washington sharply criticized President Donald Trump on Monday for staging a visit to the historic St. John's Church across from the White House, where he held up a Bible after authorities had cleared the area of peaceful protesters.

The Rev. Mariann Budde, whose diocese St. John's belongs to, said in a statement that she was “outraged” by Trump's visit and noted that he didn’t pray while stopping by the church, a landmark known for its regular visits from sitting presidents since the early 19th century.

"He took the symbols sacred to our tradition and stood in front of a house of prayer in full expectation that would be a celebratory moment," Budde said in an interview after her statement on Trump's visit was posted to the diocese's Twitter account.

“There was nothing I could do but speak out against that,” she added, calling for a focus on “the deeper wounds of the country” amid ongoing demonstrations against racial injustice.

Budde said the church was “just completely caught off-guard” by the visit, with “no sense that this was a sacred space to be used for sacred purposes." In order to facilitate Trump's statement there, she said, she believed tear gas was used in the area between the White House and the church. 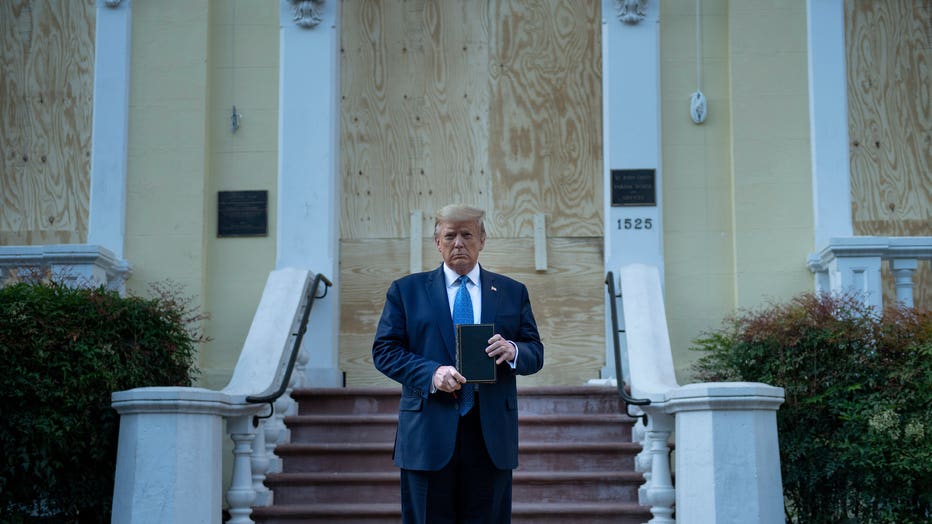 US President Donald Trump holds a Bible while visiting St. John's Church across from the White House after the area was cleared of people protesting the death of George Floyd June 1, 2020, in Washington, DC. (Photo by BRENDAN SMIALOWSKI/AFP via Getty

As protests nationwide flared following the police killing of George Floyd in Minneapolis, St. John's suffered minor damage Sunday night from a fire in the church basement. Budde said “our suffering was minimal” compared with businesses that were destroyed by recent looting, even as she defended the goals of peaceful protesters responding to Floyd's killing.

“We can rebuild the church. We can replace the furnishings of a nursery,” she said, referring to the damaged area. "We can’t bring a man’s life back."

The presiding bishop of the Episcopal Church, Michael Curry, issued his own statement saying that Trump had “used a church building and the Holy Bible for partisan political purposes."

“This was done in a time of deep hurt and pain in our country, and his action did nothing to help us or to heal us,” added Curry, the first African American to hold that leadership post for U.S. Episcopalians.

Budde took her position at the church in Washington in 2011 after spending 18 years in Minneapolis.

“I want to build up the liberal church again so we can be a legitimate conversation partner in the public arena," she told The Washington Post at the time.

The bishop, who last year joined other Washington National Cathedral leaders in a statement that excoriated Trump's “racialized rhetoric," firmly aligned her faith with the goals of peaceful protesters driven by Floyd's death to decry systemic racism.

“In no way do we support the President’s incendiary response to a wounded, grieving nation,” Budde said in her statement. “In faithfulness to our Savior who lived a life of non-violence and sacrificial love, we align ourselves with those seeking justice for the death of George Floyd.”