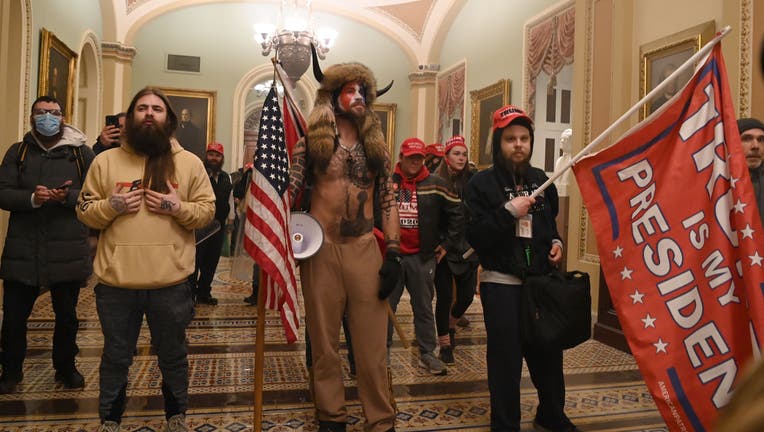 Supporters of US President Donald Trump, including member of the QAnon conspiracy group Jake Angeli, aka Yellowstone Wolf (C), enter the US Capitol on January 6, 2021, in Washington, DC. Photo by SAUL LOEB/AFP via Getty Images.

The lawyer for the so-called "QAnon Shaman" who stormed the U.S. Capitol shirtless and wearing a horned bearskin headdress said his client regrets being "duped" by former President Donald Trump, and that the former president "invited" his client and thousands of other supporters to the Capitol on Jan. 6.

Albert Watkins, the attorney for Jacob Anthony Chansley, did not immediately respond to Fox News' request for comment Saturday but told KSDK-TV that his client "regrets very, very much having not just been duped by the President, but by being in a position where he allowed that duping to put him in a position to make decisions he should not have made."

Watkins argued that Chansley was practically "invited" by Trump to the Capitol to protest the results of the presidential election and goaded by Trump's rhetoric to take extreme action to "Stop the Steal."

"Let's roll the tape. Let's roll the months of lies, and misrepresentations and horrific innuendo and hyperbolic speech by our president designed to inflame, enrage, motivate," Watkins told the news outlet.

"What's really curious is the reality that our president, as a matter of public record, invited these individuals, as President, to walk down to the Capitol with him," he added.

In the hours before the Jan. 6 attack on the Capitol that left five people -- including a Capitol police officer -- dead, Trump held a "Stop the Steal" rally, encouraging his supporters to "fight" for the "stolen election."

Shortly after, insurrectionists stormed into the Capitol building and disrupted a joint session of Congress to certify the results of the election for now-President Biden.

Following the violent event, the FBI opened a massive investigation to round up participants in the siege.

Chansley is being held in an Arizona prison awaiting charges of disorderly conduct, violent entry and illegally being on restricted spaces within the Capitol grounds in Washington, D.C., according to authorities.

Despite issuing dozens of pardons to his political allies and even to rapper Lil Wayne, Trump did not pardon anyone who stormed the Capitol earlier this month.

Watkins said he and Chansley were not "holding their breath" for a pardon but thought Trump would grant one as recognition for the loyalty of his supporters.

"The request was of extraordinary value in that it accorded Trump an opportunity to do what his followers believed would have been the 'honorable' thing to do," Watkins said.

"It would be appropriate and honorable for the president to pardon Mr. Chansley and other like-minded, peaceful individuals who accepted the president’s invitation with honorable intentions," he added.

Chansley's mother, Marth Chansley, told Fox News she has "no comment" at this time.