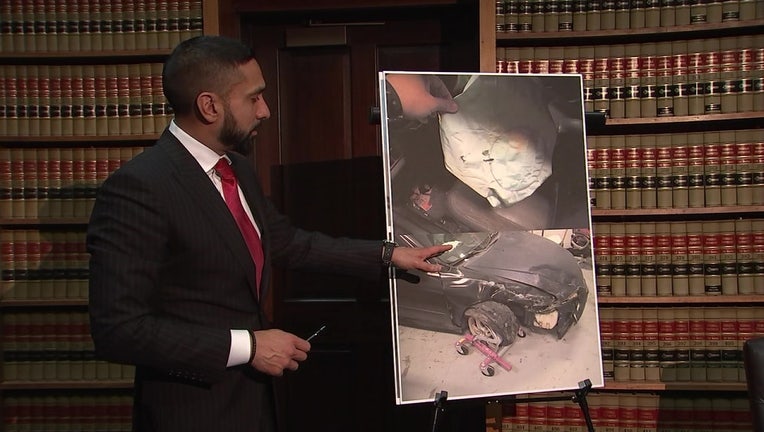 HOUSTON (FOX 26) - A Harris County resident is suing Takata Corporation and Honda Motor Company after she suffered severe injuries from a deployed airbag. The lawsuit is being filed after two recent deaths as a result of the same material deploying in the airbags.

Serna Martinez, 42, was involved in a vehicle accident on Sept. 11. During a news conference on Tuesday, her attorney said she suffered horrific injuries that she would not have sustained had the airbag not deployed.
It is being called the largest and most complex safety recall in U.S. history.

Takata Corporation has issued a recall of millions of its airbags installed by 14 different automakers. The recall is following reports of more than ten deaths and thousands of people injured. The most recent injury? Martinez, who was hurt in her 2002 Honda Accord.

"Back in 2002, they were having failures," said attorney Muhammad Aziz. "Takata did not disclose that to even Honda at that time."

Aziz displayed photos of the accident on Tuesday as well as the injuries Martinez sustained. He said both drivers involved in the accident were traveling at speeds of less than 30 mph. He also said that had the airbag not deployed, Martinez would have walked away with minor aches and pains one would experience in a low impact accident.

"Based on the totality of the evidence, we know that she would have walked out of it," said Aziz But she didn't. Another driver pulled in front of Martinez and hit her on the right side of her car. That's when the airbag deployed.

"Ms. Martinez was severely injured when the inflator in her Takata Honda airbag ruptured, causing severe lacerations," said attorney Cliff Walston. These lacerations were caused by the same shrapnel that pierced and killed 17-year-old Huma Hanif in Fort Bend County in 2016. Records indicate at least ten other deaths in the U.S. were caused by the same Takata airbag system.

"I still have severe pain in my chest and worry about having to do another surgery," said Martinez. She has had numerous stitches and will have to undergo plastic surgery. The shrapnel was three inches away from her neck.

Despite the fact that Takata has issued a recall, Aziz said Martinez never received a notice and that the recall has been ineffective, nonetheless, for months

"These parts are under a recall, however, if you or I were to go to the dealership and say, 'Hey, I've got a recall vehicle,' they don't have a fix for it."

With all the recent injuries, Honda has recently updated its website, saying in part, "our dealers are prepared to provide alternative transportation in the form of a loaner or rental vehicle, free of charge, until your own vehicle is repaired."

Aziz said his legal team is seeking more than a million dollars in this case, but also hoping that Takata will resolve the issue and make safety a priority for its customers.

If you feel your vehicle is affected by this recall, visit the following online resources: