24 hours after polls closed, and officials are still counting ballots in Arizona. The race for governor between Katie Hobbs (D) and Kari Lake (R) and the race for senate between Sen. Mark Kelly (D) and Blake Masters (R) remain too close too call. Maricopa County Board of Supervisors Chairman Bill Gates and Vice Chairman Clint Hickman issued a statement in regards to the voting problems that were reported during the early hours of Election Day. The statement reads: Over the past 24 hours, we have learned more about the printer issue that caused some ballots to not be read at Vote Centers yesterday. While the issue impacted less than 7% of Election Day voters (about 17,000 ballots), we understand that for people who went through it, this was frustrating, inconvenient, and not how they pictured Election Day. We plan to get to the bottom of it.

LAS VEGAS (AP) - With the nation awaiting results of tightly contested U.S. Senate, House and governor's races in Nevada, the elections chief in Las Vegas defended the pace of vote-counting in the state's most populous county Thursday.

"I can tell you with a great deal of confidence that everything we are doing here in Clark County is moving those ballots as quickly as we can," Clark County Registrar of Voters Joe Gloria told reporters at the regional election center in North Las Vegas. "But I have to caution you in saying we don’t want to move too fast. We want to make sure we’re accurate, validating the signatures and the identity of these folks."

Clark County, with 1.3 million registered voters, is the only county in Nevada that leans Democratic. It has more than 50,000 outstanding ballots, Gloria said Thursday, but he refused to give a breakdown of how many were received in ballot drop-boxes compared with those received in the mail. That distinction is important to campaigns as they assess whether their candidates can expect to make up ground. In the second-most populous county, Washoe, at least 40,000 ballots remain to be counted.

U.S. Sen. Catherine Cortez Masto, a Democrat, was trailing in her effort to fend off a challenge from Republican Adam Laxalt. Democratic Gov. Steve Sisolak was also in a tight race for reelection against Las Vegas-area Sheriff Joe Lombardo, who was also leading Thursday. Three House seats are in limbo.

Rep. Susie Lee, a Democrat who represents a portion of southern Nevada from Las Vegas to the Arizona border, said she was spending the time riding her mountain bike. Elections returns showed she had a narrow lead over Republican challenger April Becker. 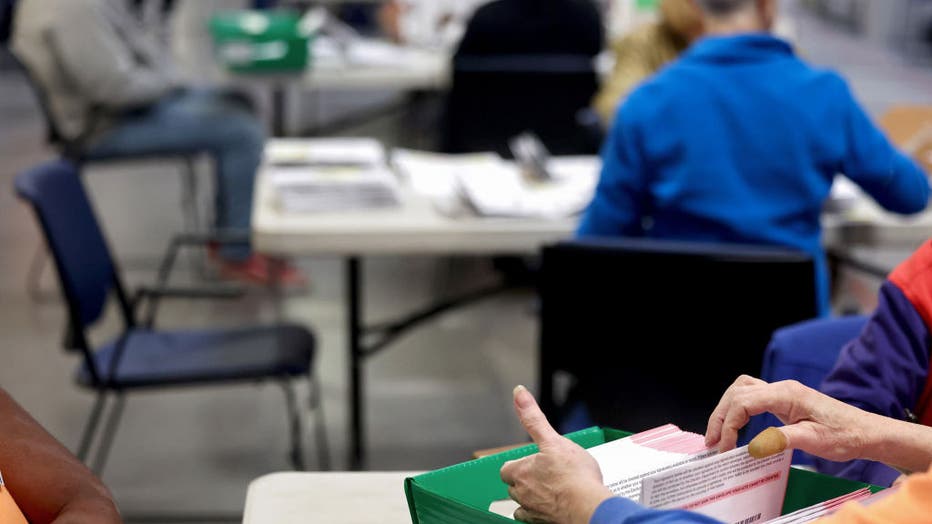 "We absolutely knew all along it would be a tight race. All my races have been very, very close. The last time we waited days and days too," Lee told The Associated Press on Thursday.

Nevada voters adopted what is widely considered the most comprehensive state version of the Equal Rights Amendment in the nation, putting protections in the state Constitution for people who have historically been marginalized.

Gloria said about 200 workers are processing ballots in Clark County and would work through at least Saturday — "Sunday we will be in here if we still have to."

He said his office has "been as transparent as we possibly can" be in letting the public view ballot-counting, giving tours to the media and having counters operate in front of glass panels.

"People are able to stand there and see every single step of the process," he said. "We’ve got staff there that’s also available to answer any questions that they may have moving from step A all the way to step Z."

Gloria also said there are security measures in place to protect workers, but he declined to detail them.

Ballots are still arriving by mail, and county election clerks statewide will count mail ballots that are received until Saturday as long as they were postmarked by Election Day, according to state law. Officials have until Nov. 17 to finish the count and submit a report to the Nevada secretary of state’s office.

Voters have until the close of business Monday to "cure" any ballots in which the signature on the ballot envelope doesn’t appear to match the voter’s signature on file. Another 5,555 provisional ballots will also be reviewed starting next week.

In heavily Republican, rural Nye County, workers on Thursday resumed their plan to count every paper ballot by hand, using a new method in which ballot control teams receive, distribute and verify batches of ballots and separate tally teams count the results in silence. The hand-count is a secondary method to Dominion Voting Systems tabulators, which recorded 18,089 votes.

The secretary of state’s office had ordered Nye County interim clerk Mark Kampf to halt the hand-count ahead of Election Day, citing fears that early results could be released.