With Election Day just days away, a federal judge has issued a ruling that limits how ballot drop boxes can be monitored by various groups. The ruling came amid alleged acts of voter intimidation that have been reported to authorities in Arizona.

PHOENIX - A federal judge on Tuesday ordered armed members of a group monitoring ballot drop boxes in Arizona to stay at least 250 feet away from the locations following complaints that people wearing masks and carrying guns were intimidating voters.

U.S. District Court Judge Michael Liburdi said members of Clean Elections USA, its leader and anyone working with them are also barred from filming or following anyone within 75 feet (23 meters) of a ballot drop box or the entrance to a building that houses one. They also cannot speak to or yell at individuals within that perimeter unless spoken to first.

The temporary restraining order was requested by the League of Women Voters of Arizona after Clean Elections USA, encouraged people to watch 24-hour ballot boxes in Maricopa County, Arizona’s most populous county.

"It is paramount that we balance the rights of the defendant to engage in their constitutionally protected First Amendment activity with the interest in the plaintiffs and in voters casting a vote free of harassment and intimidation," Liburdi said. 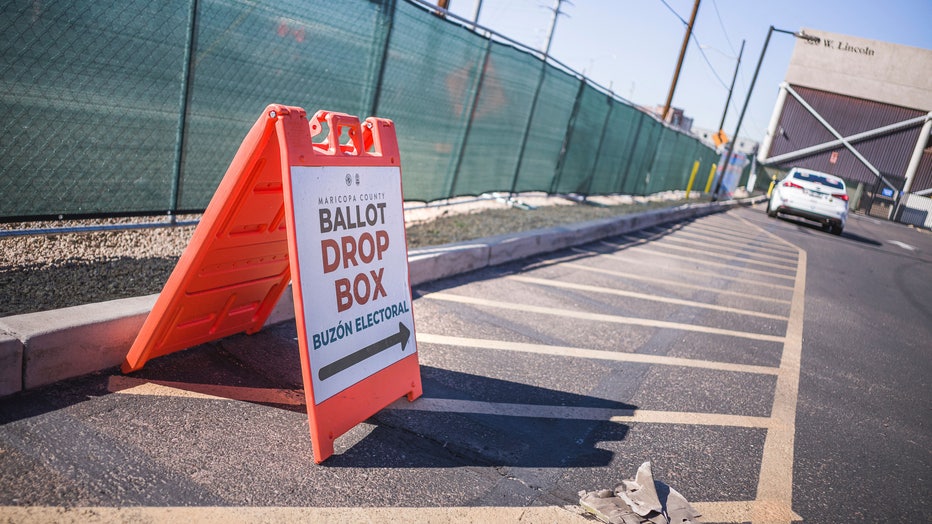 Fences surround the Maricopa County Tabulation and Elections Center (MCTEC) in Phoenix, Arizona, on October 25, 2022, to help prevent incidents and pressure on voters at the ballot drop box. (Photo by OLIVIER TOURON/AFP via Getty Images)

A second set of defendants in rural Yavapai County — groups known as the Lions of Liberty and the Yavapai County Preparedness team, who are associated with the far-right anti-government group Oath Keepers — were dismissed from the case on Monday after they pledged to stand down their operations.

Local and federal law enforcement have been alarmed by reports of people, some armed, watching 24-hour ballot boxes in the two counties as midterm elections near. Some voters have complained alleging voter intimidation after people watching the boxes took photos and videos, and followed voters.

Sheriff’s deputies have been providing security around the two outdoor drop boxes in Maricopa County after a pair of people carrying guns and wearing bulletproof vests showed up at a box in the Phoenix suburb of Mesa. The county’s other 24-hour outdoor drop box is at the Maricopa County Tabulation and Election Center in downtown Phoenix, which is now surrounded by a chain link fence.

Arizona Attorney General Mark Brnovich, a Republican, has called on voters to immediately report any intimidation to police and file a complaint with his office. Arizona’s Secretary of State Katie Hobbs last week said her office received six cases of potential voter intimidation to the state attorney general and the U.S. Department of Justice, as well as a threatening email sent to the state elections director. 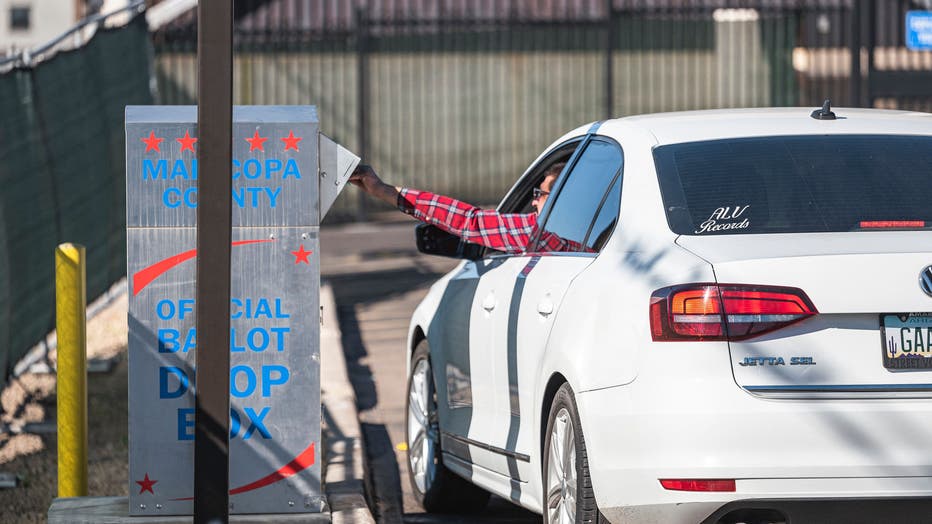 Fences surround the Maricopa County Tabulation and Elections Center (MCTEC) to help prevent incidents and pressure on voters at the ballot drop box, as a voter submits their ballot in Phoenix, Arizona, on October 25, 2022. (Photo by OLIVIER TOURON/AF

The U.S. attorney’s office in Arizona has vowed to prosecute any violations of federal law but said local police were at the "front line in efforts to ensure that all qualified voters are able to exercise their right to vote free of intimidation or other election abuses."

The temporary order issued by Liburdi on Tuesday will be in effect for two weeks and the cooperation from the monitoring group "shall not be construed as an admission they have engaged in any of these activities," the judge added.

Other stipulations include the groups post on their websites and social media that it is untrue that dropping off multiple ballots is illegal in all cases. Exceptions are allowed for family members, members of the same household and caregivers.

Alexander Kolodin, the lead attorney for the defendants, said the League of Women Voters of Arizona ultimately failed to completely shut down the monitors’ mission. Still, the groups are not happy about the limits, since he said they could prevent them from discouraging ballot box stuffing.

"They’re worried they can’t record what happens within the 75 feet. They may have missed an opportunity to deter unlawful conduct," Kolodin said. "Today’s order may make drop box voting a little less secure."

An Associated Press review this summer found no major fraud from the expanded use of ballot drops boxes in the 2020 election.

READ MORE: Slavery is on the ballot for voters in these 5 states

The League of Women Voters of Arizona encouraged voters to keep using the drop boxes.

"Today’s U.S. District Court decision is a victory for the voters of Arizona who have the right to cast their ballots free from intimidation, threats, or coercion," Pinny Sheoran, the group’s president, said in a statement.

This lawsuit was folded into another case before Liburdi.

On Friday, the judge said Arizona Alliance for Retired Americans failed to make its argument against Clean Elections USA. Another defendant, Voto Latino, was also removed from the case.

"Defendants have not made any statements threatening to commit acts of unlawful violence to a particular individual or group of individuals," the judge wrote.

Liburdi concluded that "while this case certainly presents serious questions, the Court cannot craft an injunction without violating the First Amendment." The judge is a Trump appointee and a member of the Federalist Society, a conservative legal organization.

The Department of Justice on Monday said it would join the case, saying that the actions raised serious concerns about voter intimidation.

Luke Cilano, a Lions of Liberty board member, said the organization had dropped its "Operation Drop Box" initiative last Wednesday "due to being lumped in with people who don't adhere to the law and our rules of engagement."

READ MORE: Which states have voting changes on the ballot this election?

The Lions of Liberty are not associated with Clean Elections USA, he said. They are connected to the Yavapai County Preparedness Team. But he says the team was not involved in ballot box monitoring.

Similar groups around the United States have embraced a film that has been discredited called "2000 Mules" that claims people were paid to travel among drop boxes and stuff them with fraudulent ballots during the 2020 presidential vote.

There’s no evidence for the notion that a network of Democrat-associated ballot "mules" has conspired to collect and deliver ballots to drop boxes, either in the 2020 presidential vote or in the upcoming midterm elections.