Video: President Biden falls off bike as he approaches crowd

The president biked over to a crowd of well-wishers as he finished a morning bike ride in Delaware, then tumbled as he tried to dismount.

REHOBOTH BEACH, Del. - President Joe Biden fell when he tried to get off his bike at the end of a ride Saturday at Cape Henlopen State Park near his beach home in Delaware, but said he wasn't hurt.

"I'm good," he told reporters after U.S. Secret Service Agents quickly helped him up. "I got my foot caught" in the toe cages.

Biden, 79, and first lady Jill Biden were wrapping up a morning ride when the president decided to pedal over to a crowd of well-wishers standing by the bike trail. Biden, who was wearing a helmet, tumbled when he tried to dismount.

The president quickly collected himself and spent several minutes chatting with people who had gathered to watch him bike.

In a statement, the White House said that Biden's foot got caught in the pedal when he tried to take it out during the stop.

"The President said, his foot got caught on the pedal while dismounting and he is fine. No medical attention is needed," a White House official said. "The President looks forward to spending the rest of the day with his family."

The Bidens are spending a long weekend at their Rehoboth Beach home. They marked their 45th wedding anniversary on Friday. 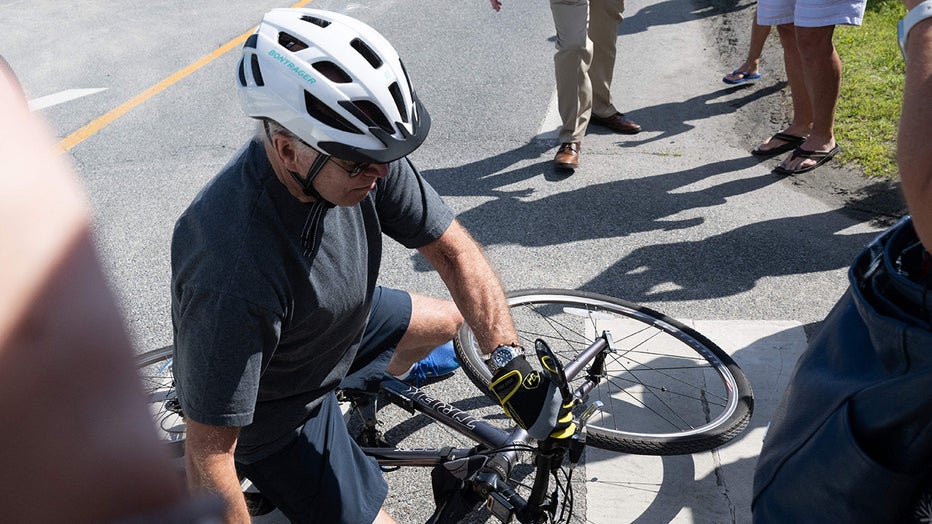 US President Joe Biden falls off his bicycle as he approaches well-wishers following a bike ride at Gordon's Pond State Park in Rehoboth Beach, Delaware, on June 18, 2022. (Photo by Saul Loeb/AFP via Getty Images)

While walking out of church on Saturday evening, Biden was asked by a reporter how he was feeling. In response, he began hopping.

"Good, there you go," the reporter said.

Biden waved to a crowd of people gathering on the sidewalk as he entered a car.