Security tightens at Capitol amid threats of violence, upcoming inauguration

Hundreds of National Guard members gathered on the floor of the U.S. Capitol on Jan. 13, as lawmakers neared the second impeachment of President Donald Trump in the wake of a deadly siege by his supporters.

The threat of extremist groups descending on state capitals in a series of demonstrations Sunday prompted governors to roll out a massive show of force and implement tight security measures at statehouses across the country.

Fencing, boarded-up windows and lines of police and National Guard troops have transformed statehouse grounds ahead of expected demonstrations leading up to President-elect Joe Biden's inauguration on Wednesday.

The stepped-up security measures were intended to safeguard seats of government from the type of violence that occurred at the U.S. Capitol on Jan. 6, when a mob supporting President Donald Trump overran the building while Congress was certifying the Electoral College vote.

The FBI has warned of the potential for armed protests at the nation's Capitol and all 50 state capitol buildings beginning this weekend. Some social media messages had targeted Sunday for demonstrations, though it remained unclear how many people might show up.

Security in Washington, D.C., has intensified ahead of the inauguration. Tall fencing surrounds the U.S. Capitol, the National Mall is closed to the general public, and the District of Columbia's mayor asked people not to visit. Some 25,000 National Guard troops from around the country were due in the city by early in the week.

In the states, some authorities said they had no specific indication that demonstrations would occur, much less turn violent. Yet many state officials vowed to be prepared, just in case. They said they did not want a repeat of the mob's assault on the Capitol, which left a Capitol Police officer and four others dead. Dozens of other officers were injured.

More than a third of governors had called out the National Guard to help protect their state capitols and aid local law enforcement officers. Several governors issued states of emergency, and others closed their capitols to the public until after Biden's inauguration day. 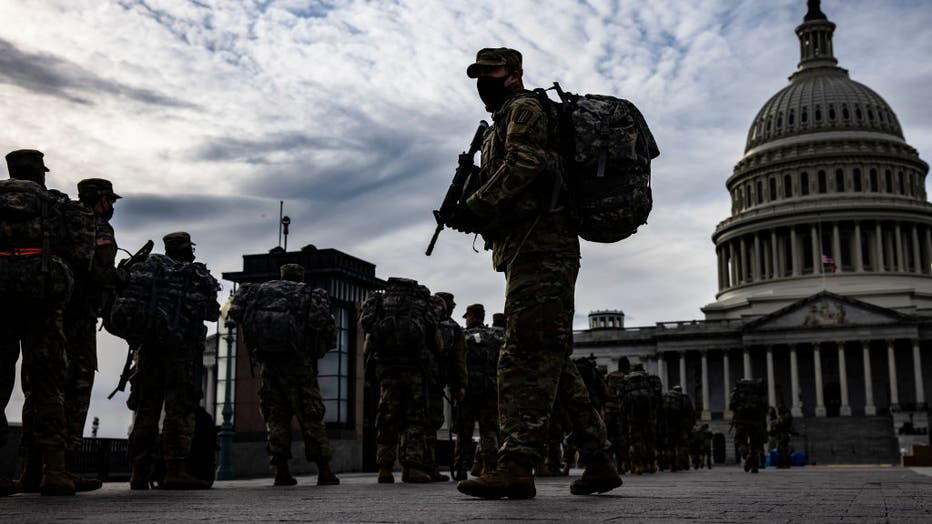 Virginia National Guard soldiers arrive at the east front of the U.S. Capitol on January 16, 2021 in Washington, DC. (Photo by Samuel Corum/Getty Images)

Some state legislatures also canceled sessions or pared back their work for the coming week, citing security precautions. Texas is among the states closing their capitol grounds through the inauguration.

"The Texas Department of Public Safety is aware of armed protests planned at the Texas State Capitol this week and violent extremists who may seek to exploit constitutionally protected events to conduct criminal acts," said Steve McCraw, the agency’s director.

More than 100 troopers in riot gear were stationed outside the Capitol in Austin earlier this week as lawmakers began a new legislative session.

Even before the violence at the U.S. Capitol, some statehouses had been the target of vandals and angry protesters during the past year.

Last spring, armed protesters entered the Michigan Capitol to object to coronavirus-related lockdowns and were confronted by police. People angered over the death of George Floyd, who died after a Minneapolis police officer pressed a knee into his neck for several minutes, vandalized capitols in several states, including Colorado, Ohio, Texas and Wisconsin.

And just last month, crowds in Oregon forced their way into the state Capitol in Salem to protest its closure to the public during a special legislative session on coronavirus measures.

Anticipating the potential for violence in the coming week, the building's first floor windows were boarded up and the National Guard has been deployed. The Legislature was scheduled to begin its 2021 session on Tuesday, but much of its initial work has been delayed for at least two days because of warnings about potential violence.

’The state Capitol has become a fortress," said Oregon Senate President Peter Courtney, a Democrat. "I never thought I’d see that; it breaks my heart."