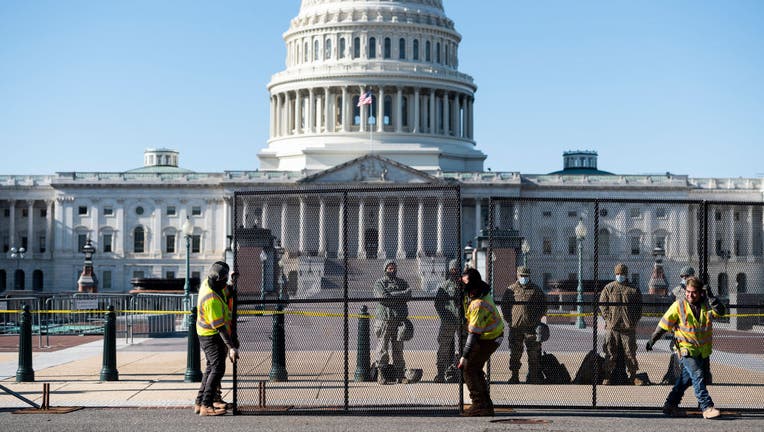 UNITED STATES - JANUARY 7: Workers install more robust fencing along the east side of the U.S. Capitol on Thursday morning, January 7, 2021, following the riot at the Capitol the day before. (Photo By Bill Clark/CQ-Roll Call, Inc via Getty Images)

WASHINGTON (FOX 5 DC) - The National Guard erected what they described as a "non-scalable fence" to protect the U.S. Capitol on Thursday – one day after pro-Trump supporters stormed the building.

The U.S. Capitol Police chief says he will resign after officers failed to protect the Capitol during yesterday’s riot.

U.S. Capitol Police Chief Steven Sund will resign amid calls to do so following the violent breach of the building, effective Jan. 16.

Earlier Thursday, Sund defended his department's response to the mob in a statement, saying officers "acted valiantly when faced with thousands of individuals involved in violent riotous actions" as they stormed the building.

FOX 5’s Bob Barnard has the latest on the Capitol Police investigation following deadly riots at the U.S. Capitol.

The attack on the Capitol was "unlike any I have ever experienced in my 30 years in law enforcement here in Washington, D.C.,'' said Sund, a former city police officer. "Make no mistake: these mass riots were not First Amendment activities; they were criminal riotous behavior. The actions of the USCP officers were heroic given the situation they faced.''

On Wednesday, supporters marched to the Capitol building following a rally featuring President Donald Trump and quickly overwhelmed Capitol police and their barriers before penetrating the building and clashing with law enforcement inside.

One day after chaos enveloped the Capitol Hill neighborhood,

The protesters were challenging the results of the 2020 election, and hoped to halt the Electoral College vote count after Congress had already convened.

In addition, McCarthy said the National Guard members who were already in the nation’s capital to support D.C. and Capitol police would be augmented by members from neighboring states. 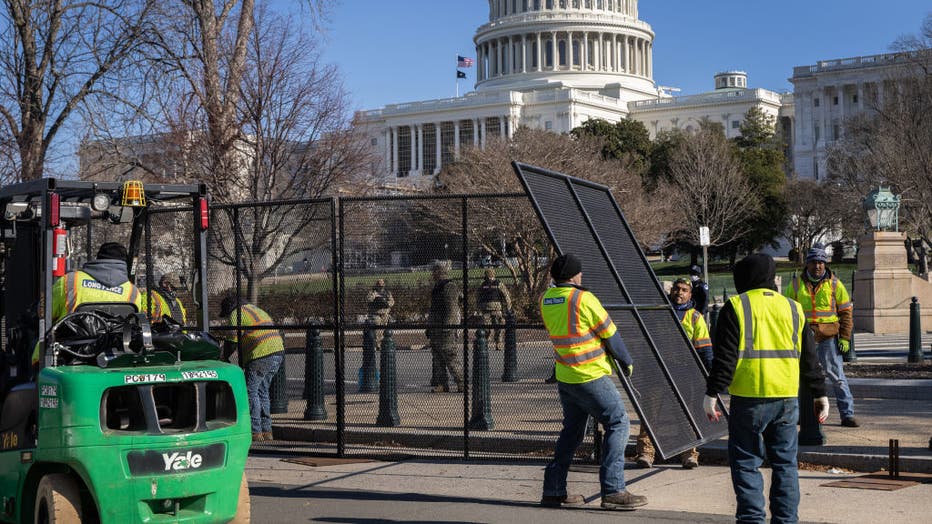 WASHINGTON, DC - JANUARY 07: Workers build a fence around the U.S. Capitol on January 07, 2021 in Washington, DC. Supporters of President Trump had stormed and ransacked the building the day before as Congress debated the a 2020 presidential election

Late on Wednesday, Maryland and Virginia sent National Guard members to help enforce security in the capital. He noted that additional National Guard commitments were made by Delaware, Pennsylvania, New Jersey and New York.

According to McCarthy, there were currently 150 National Guard members on the Capitol grounds when he spoke around noon, and they would soon swell to 850.

DC Police Chief Robert Contee says protocol and jurisdiction were both considerations that had to be taken into account before officers could respond to the riots that took place at the U.S. Capitol on Wednesday.

By the weekend, 6,200 National Guard members will be in the D.C. area to support Capitol police and D.C. police, he said.

Bowser has extended a public emergency order for 15 days – through Inauguration Day. 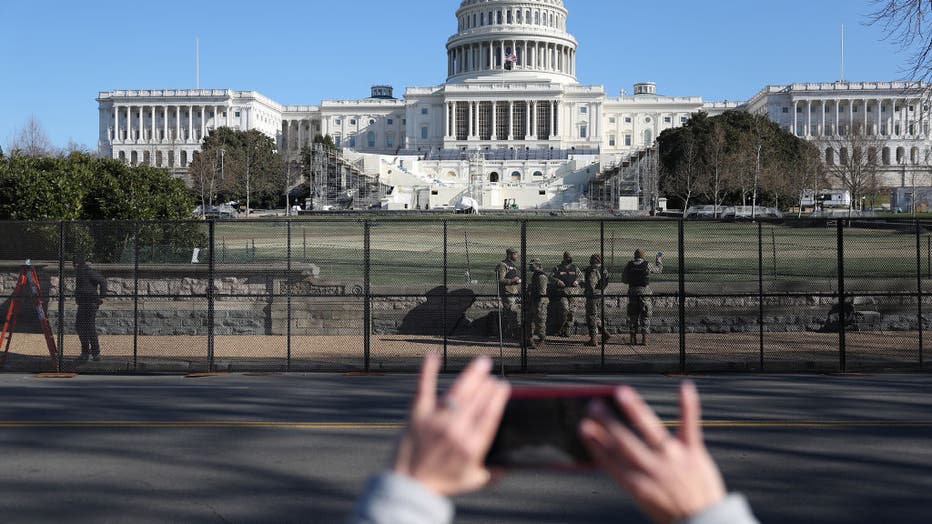 WASHINGTON, DC - JANUARY 07: Members of the D.C. National Guard are seen outside the U.S. Capitol Building as workers construct a fence a day after a pro-Trump mob broke into the building on January 07, 2021 in Washington, DC. Congress finished tally