The football programs at Gaithersburg and Northwest High Schools have been temporarily suspended as police investigate a massive fight that broke out at a football game between the two schools on Friday. FOX 5's Nana-Séntuo Bonsu reports on the latest.

MONTGOMERY COUNTY, Md. - Officials stopped a high school football game in Gaithersburg Friday night after a fight broke out among players on the field.

Montgomery County police received a call at 8:23 p.m. to provide additional units for crowd control due to a fight at Gaithersburg High School.

Police said that the fight only involved players from Northwest High School and Gaithersburg on the field and that no spectators were involved.

However, according to school officials, several scuffles broke out among individuals outside the stadium. Officials said a few students were involved in the scuffles. 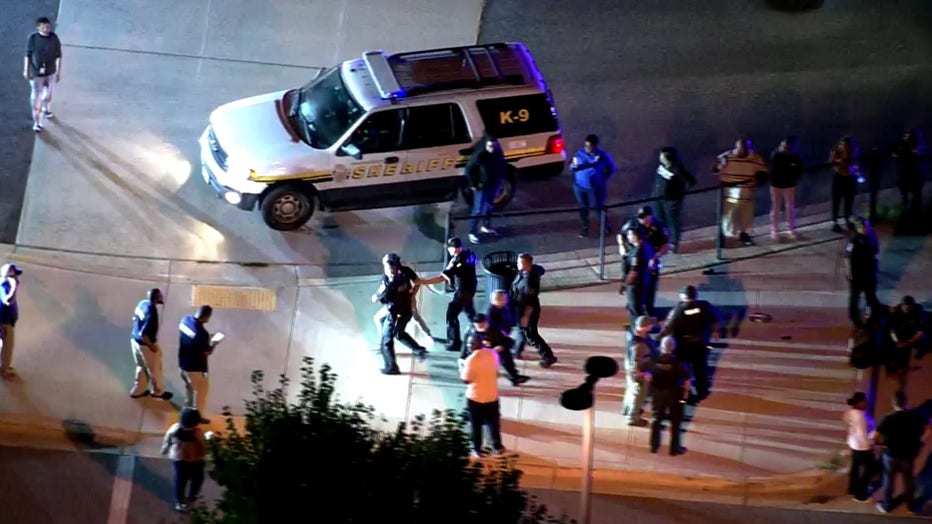 At this time, authorities said one school staff member sustained a non-life-threatening injury and is being treated by medical personnel.

One police officer was assaulted but did not require medical care. One victim is being treated for lacerations.

Montgomery County Police said one person who was armed with a knife is in custody. A few individuals believed to be involved in the various altercations were also taken into custody and police said that they will be charged accordingly.

The matchup between the Gaithersburg Trojans and the Northwest Jaguars was called off early and declared a 14-0 victory for Northwest.

Fight breaks out at high school football game in Gaithersburg

SKYFOX was over the scene of a large fight at a Gaithersburg High School football game on Friday night, that led to the game being canceled, several arrests being made, and an officer getting assaulted.

In response to the incident, Montgomery County Public Schools released the following statement saying both schools will be temporarily suspending their football programs as police investigate the incident:

"Montgomery County Public Schools (MCPS) strongly condemns the abhorrent and unacceptable behavior that occured at the football game last night – on Friday, September 16, 2022 – between Northwest and Gaithersburg at Gaithersburg High School. The district is swiftly moving to develop and implement enhanced measures for safety at any athletic event and will communicate those to our community in the coming days. As agreed upon by both MCPS and both schools, all football operations at those two schools will be suspended temporarily, to assist in the ongoing investigation. The district will pursue disciplinary actions against any individuals who are found to have participated in this large altercation, while working to bring communities together around the importance of upholding safe and respectful environments."

Officials stopped a high school football game in Gaithersburg Friday night after a fight broke out among players on the field.

The principal's of both high schools also released a joint statement on the incident, promising to develop plans to enhance safety and ensure order at future school athletic events.

"We, the principals of our two schools, write to you today about the extremely disturbing events at the football game held at Gaithersburg High School last Friday evening. Late in the game, a fight broke out between two players, which then transitioned to other players and coaches becoming involved. Once the incident was resolved, the officials decided to disqualify both teams, resulting in a double-forfeiture of the game. After safely getting both teams out of the stadium, a number of individuals, including a few students, fought in the parking lot, and were subsequently arrested as they refused police orders to disperse, and in some cases, physically struggled with police. This was a dangerous situation and we will work with our central office partners to swiftly develop plans to enhance safety and ensure order at future school athletic events. We wish to be very clear that together we strongly condemn this unacceptable behavior that occured at the football game. This disrespectful and dangerous behavior is not what we model and communicate to our students and must not be tolerated. Fighting, and causing physical and emotional injury, is in no way an appropriate way to solve conflict. We ask all those involved or who witnessed this event to consider what could have happened had our police partners, security personnel and school staff not acted so quickly to de-escalate this incident. Following a thorough investigation, disciplinary actions against any individuals (students or adults) who are found to have participated in these actions will be issued. As agreed upon by both MCPS and our respective schools, to assist in the ongoing investigations, all football operations at both schools will be suspended temporarily. The Athletics programs in MCPS are designed to support and enhance the academic experience for our students and help build school and community spirit. Each week, the vast majority of our students participate in and attend hundreds of athletic contests, demonstrating the respect and sportsmanship we expect as outlined in the MCPS R.A.I.S.E. core values. We will reinforce these values with our students at school and we ask you to discuss these expectations with your children before they attend any school event. We are in the process of updating our plans to ensure safety at upcoming events and once fully developed we will share those details with our school communities."