A long line of ambulances waited outside a crematorium in Bengaluru, India, on April 29, as COVID deaths in the country mounted. Credit - Zameer Baig via Storyful

NEW DELHI - India set another global record in new COVID-19 cases on Thursday, reporting more than 379,000 new infections amid a devastating surge that has also sent deaths soaring and resulted in ambulances waiting for hours outside crematoriums.

Experts believe both figures are an undercount, but it’s unclear by how much.

The country has set a daily global record for seven of the past eight days, with a seven-day moving average of nearly 350,000 infections. Daily deaths have nearly tripled in the past three weeks, reflecting the intensity of the latest surge. And the country's already teetering health system is under immense strain, leading to shortages of oxygen and other hospital supplies.

The amount of virus-related deaths has left ambulances waiting for hours outside crematoriums.

Video captured Wednesday in the southern city of Bengaluru showed more than a dozen ambulances idling outside the Panathur Crematorium. Zameer Baig, who shot the video, said he arrived at 9:30 a.m. and was still waiting by 4 p.m.

Baig is a volunteer with the local organization Mercy Angels, which aims to give "dignified funerals" to COVID-19 victims. He told Storyful that people had left their "loved ones in the ambulances, because [they are] afraid of infection."

India, which has a population of nearly 1.4 billion people, had thought the worst was over when cases declined in September. But mass public gatherings such as political rallies and religious events that were allowed to continue and relaxed attitudes on the risks fed by leaders touting victory over the virus led to what now has become a major humanitarian crisis, health experts say. New variants of the coronavirus have partly led the surge.

RELATED: US, WHO to send oxygen, other COVID-19 supplies to India amid deadly surge in cases

The country began the process of rolling out COVID-19 vaccines to all Indians 18 and older. Starting Wednesday, people could begin registering on a government app for vaccinations — but the effort hit some snags. Social media was flooded with complaints that the app had crashed due to high use, and once it was working again, no appointments were available.

Vaccinations are supposed to start Saturday, but India does not have enough doses for everyone — despite being one of the world’s biggest producers of vaccines. Even the ongoing effort to inoculate people above 45 is stuttering.

One state, Maharashtra, has already said it won’t be able to start on Saturday.

Satyender Jain, health minister in the capital, New Delhi, also told the Press Trust of India news agency on Thursday that the city doesn't have enough doses to vaccinate people between 18 and 44.

Amid the crisis, voting for the eighth and final phase of the West Bengal state elections began Thursday, even as the devastating surge of infections and deaths continued, filling crematoriums and graveyards.

More than 8 million people are eligible to vote in at least 11,860 polling stations across the state. The Election Commission has said social distancing measures will be in place. 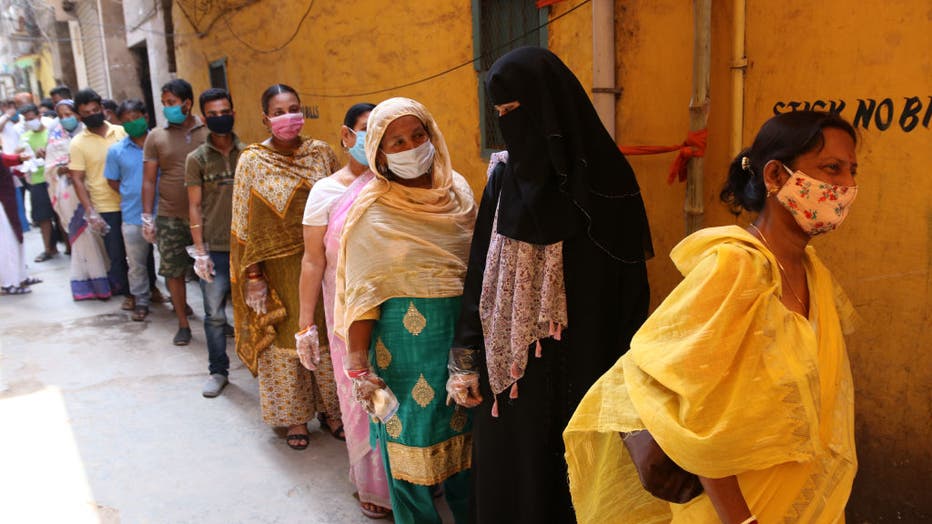 People wearing masks wait in line in front of a polling station during the 7th phase of West Bengal assembly elections in Kolkata, India on April 26, 2021. (Photo by Debajyoti Chakraborty/NurPhoto via Getty Images)

Prime Minister Narendra Modi and his Bharatiya Janata Party have faced criticism over the last few weeks for holding huge election rallies in the state, which health experts suggest may have driven the surge there. Other political parties also participated in rallies.

The state recorded more than 17,000 cases in the last 24 hours — its highest number since the pandemic began.

Tanker trucks arrived for filling with liquid oxygen in Visakhapatnam, India, on April 22, part of the country's effort to help with dangerously low levels at hospitals. Credit - RINL via Storyful

With a surge of more than 3 million active cases pushing the Indian health system close to collapse, multiple allies have sent help from overseas.

The White House said the U.S. will send more than $100 million worth of items, including 1,000 oxygen cylinders, 15 million N95 masks and 1 million rapid diagnostic tests. They will begin arriving Thursday, just days after President Joe Biden promised to step up assistance. The U.S. and Britain have already sent a shipment of medical items.

Meanwhile, the U.S. has advised its citizens to leave India. An alert on the U.S. Embassy’s website warned that "access to all types of medical care is becoming severely limited in India due to the surge in COVID-19 cases."