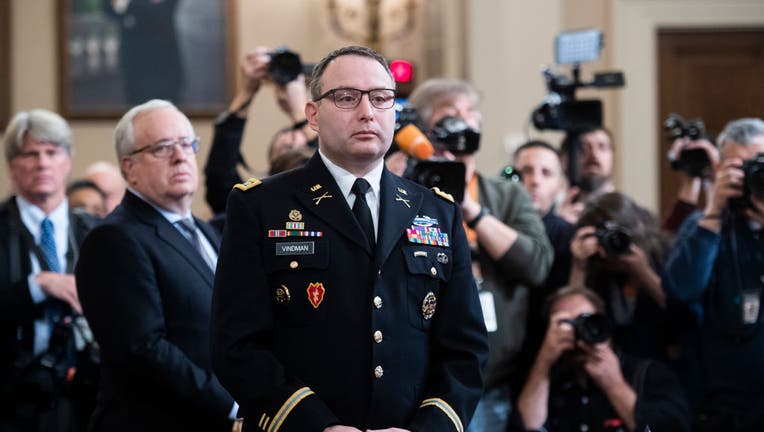 UNITED STATES - NOVEMBER 19: Lt. Col. Alexander Vindman, director of European affairs at the National Security Council, waits for the arrival of Jennifer Williams, an aide to Vice President Mike Pence, before testifying during the House Intelligence

WASHINGTON (FOX NEWS) - Lt. Col. Alexander Vindman, who made waves as a witness during the Trump impeachment proceedings, was fired Friday by the National Security Council and escorted off of the White House grounds, Fox News has confirmed.

Vindman was on detail to the National Security Council from the Department of Defense, and it is expected he will return there. It comes just two days after President Trump was acquitted in the Senate on the impeachment charges brought by the House last year over his dealings with Ukraine.

VINDMAN DRAWS APPLAUSE DURING IMPEACHMENT HEARING: 'THIS IS AMERICA'

In a lengthy statement, Vindman’s attorney, David Pressman, confirmed that Vindman had been escorted out of the White House on Friday.

“There is no question in the mind of any American why this man’s job is over, why this country now has one less soldier serving it at the White House,” Pressman said. “LTC Vindman was asked to leave for telling the truth. His honor, his commitment to right, frightened the powerful.”

The news comes after reports that the White House was weighing options to dismiss Vindman from the NSC in an effort to shrink its foreign policy bureaucracy. Bloomberg reported Thursday that the White House planned to frame Vindman’s exit as part of an NSC staff downsizing, not retaliation.

Trump, when asked about the reports Friday, told reporters that he was "not happy with him."

"You think I'm supposed to be happy with him? I'm not," Trump said, adding that a decision would be made soon.

Meanwhile, Defense Secretary Mark Esper appeared to welcome the speculation that Vindman could be reassigned back to the Pentagon.

"We welcome back all of our service members wherever they served to any assignment they're given," Esper told reporters Friday. "[A]s I said, we protect all of our persons, servicemembers from retribution or anything like that. We have already addressed that in policy and other means."

Vindman was an important witness for Democrats during the House impeachment inquiry. Vindman raised concerns over Trump’s July 25 phone call with Ukrainian President Volodymyr Zelensky, in which he pressed Kiev to launch an investigation concerning presidential candidate Joe Biden's family.

House Judiciary Committee Chairman Jerrold Nadler, D-N.Y., on Friday blasted the removal of Vindman, calling it a "subversion of justice."

"People who disagree with me are not scum," Nadler told reporters Friday. "It's more than just settling scores. This is a subversion of justice."

The House voted to impeach Trump in December. On Wednesday, after a weeks-long trial, the Senate voted to acquit the president on both charges against him—abuse of power and obstruction of Congress.

During Vindman’s testimony before the House Intelligence Committee, he drew applause after expressing his love for America, when asked how he overcame his fear of being retaliated against.

“Congressman, because this is America. This is the country I have served and defended, that all of my brothers have served. And here, right matters," Vindman said. "I knew I was assuming a lot of risks. [My father] deeply worried about [my testimony]. Because in his context, it was the ultimate risk."