NEW ORLEANS - Data from an Air Force Reserve aircraft indicated that Ida had strengthened into a hurricane Friday afternoon as it approached the Isle of Youth, Cuba.

Ida could be a major Category 3 hurricane by the time it finally reaches the U.S. coast, prompting a hurricane watch for New Orleans as the area prepares to mark the 16th anniversary of Hurricane Katrina’s landfall.

Ida strengthened into a 75 mph storm on Friday afternoon as it nears the western side of Cuba later in the day, according to the U.S. National Hurricane Center. Hurricane warnings were issued for the Isle of Youth and the Cuban provinces of Pinar del Rio and Artemisa.

"We do have a major storm heading our way," Cantrell said. "We are activating every single resource at our disposal so that we are prepared to respond. We plan for this all year long."

The mayor signed a declaration of emergency, calling for a mandatory evacuation for all areas outside the levee protection system.

"This is the time to take action," Cantrell continued.

Cantrell said it remains a fluid situation, but wind gusts will start to increase as early as tomorrow.

"Communication is our greatest tool," Cantrell said. "If you need something, you need to say something. Do not wait."

Forecasters said the real danger begins over the Gulf, where Ida was predicted to strengthen very quickly, reaching 115 mph before landfall in the Mississippi River delta late Sunday or early Monday, experts said.

Louisiana Gov. John Bel Edwards issued an emergency declaration for the state, as Category 3 hurricanes are capable of causing devastating damage. This weekend also marks the 16th anniversary of the devastating Hurricane Katrina, which made landfall off the coast of Louisiana on Aug. 29, 2005, as a Category 3 storm.

Katrina’s surge caused widespread levee failures and left 80% of the city underwater, prompting billions of dollars later spent to improve the system of levees, pumps and other infrastructure that protects the city from storms.

"Unfortunately, all of Louisiana’s coastline is currently in the forecast cone for Tropical Storm Ida, which is strengthening and could come ashore in Louisiana as a major hurricane as Gulf conditions are conducive for rapid intensification," Gov. John Bel Edwards said.

"By Saturday evening, everyone should be in the location where they intend to ride out the storm," the governor added. 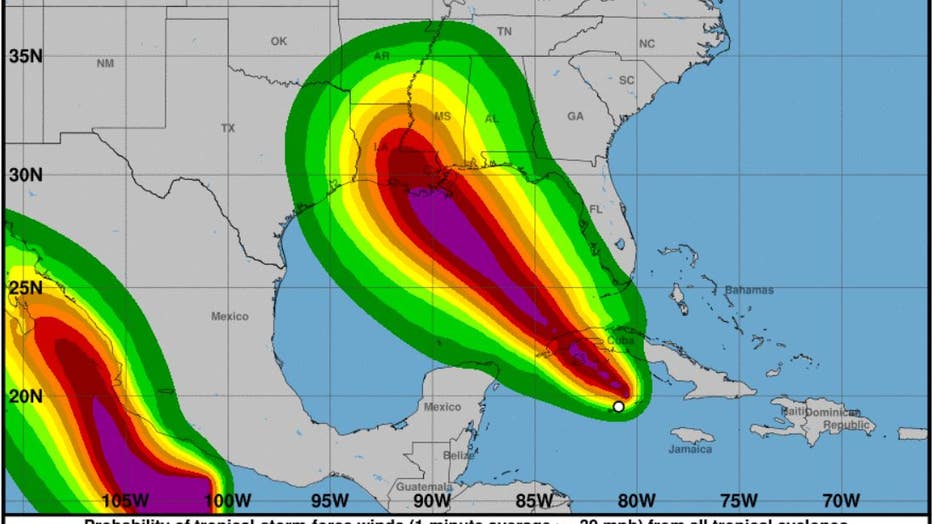 A hurricane watch was in effect from Cameron, Louisiana, to the Mississippi-Alabama border — including Lake Pontchartrain, Lake Maurepas and metropolitan New Orleans.

Dangerous storm surge was also possible for the Gulf Coast. Depending on the tide as Ida approached the coast, 7 to 11 feet of storm surge was forecast from Morgan City, Louisiana, to Ocean Springs, Mississippi.

"There is an increasing risk of life-threatening storm surge, damaging hurricane-force winds, and heavy rainfall Sunday and Monday, especially along the coast of Louisiana," the hurricane center said.

On Friday morning, Ida had maximum sustained winds of 65 mph and was traveling northwest from Grand Cayman toward Cuba’s Isle of Youth at about 15 mph, according to the National Hurricane Center. Tropical-storm-force winds extended as far as 80 miles from the center.

"This one is going to ramp up in a hurry. There’s not a lot of hurdles in its way," Sadiku explained. "Yeah, it’s going to pass the western tip of Cuba there but once it emerges into the Gulf of Mexico all signs point to a rapidly intensifying system."

The storm was forecast to drop up to 20 inches of rain over western Cuba, where deadly flash floods and mudslides were possible. By the time it reaches the central Gulf Coast Sunday afternoon, it could dump 8 to 16 inches of rain, with 20 inches in isolated areas, from southeast Louisiana to coastal Mississippi and Alabama through Monday morning.

Forecasters warned of possible flash floods and mudslides and a tidal storm surge of as much as 2 to 4 feet above normal, along with "large and destructive waves."