A 6-year-old Georgia boy wants his new classmates to know he's there for them and will be wearing a T-shirt that says I will be your friend on his first day of school.

FAYETTEVILLE, Ga. - A 6-year-old boy named Blake will be wearing a T-shirt with a special message for everyone to see on his first day at a Georgia elementary school: “I will be your friend.”

The sweet message was his idea, according to his mother Nikki Rajahn, who posted about it on her business’ Facebook account.

The post, which was made on July 29 through Unfading Adornments, featured an image of her son in an orange T-shirt with bright green lettering that reads “I will be your friend.”

Rajahn said she told Blake that she would make him a T-shirt with anything he’d like on it as a back-to-school gift.

“He thought a while and said, ‘Will you please make a shirt that says ‘I will be your friend’ for all the kids who need a friend to know that I am here for them?’” she said in her post. “Never underestimate your kid’s heart for others! I love my sweet Blake!”

Blake will be wearing his friendly shirt on his first day at North Fayette Elementary school on Monday, according to his mother.

Since she posted the photo and a local news station reported on it, she’s received many requests for the shirt.

“Ever since I posted about my son and his shirt, I have sold some and told Blake about it. He said, ‘Oh good! Now more and more people are going to have more and more friends!’ He is just so flattered so many want to be his twin, too,” she said in a post.

Nikki is selling more of the T-shirts through her page for $15 plus shipping costs. She said a portion of all proceeds will be donated to The Real Life Center, a Georgia-based nonprofit that helps people in the community who are going through difficult times. 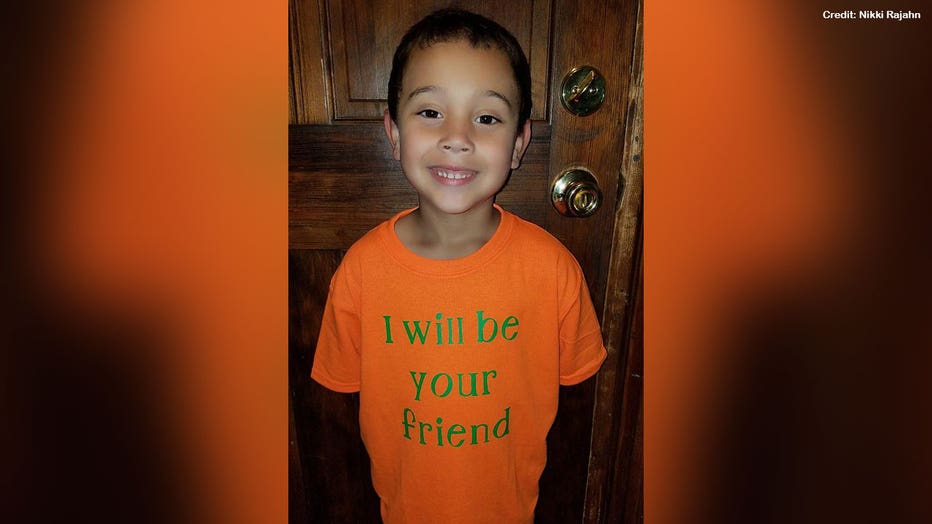 Blake, 6, is shown wearing his custom T-shirt that is orange with bright green letters that say "I will be your friend." (Photo credit: Nikki Rajahn via Unfading Adornments Facebook page)