The massive storm that barreled into southwest Florida delivering catastrophic winds, rain, and flooding is likely to further damage the insurance market in the state, which has strained under billion-dollar losses, insolvencies, and skyrocketing premiums.

The scale of the storm's destruction will become more clear in the coming days, but there is concern it could exacerbate existing problems and burden a state insurance program that has already seen a sharp increase in policies as homeowners struggle to find coverage in the private market.

"Florida’s property insurance market was the most volatile in the U.S. before Hurricane Ian formed and will most likely become even more unstable in the wake of the storm," said Mark Friedlander, communications director at the Insurance Information Institute.

The private insurance industry has lost more than $1 billion in each of the last two years and hundreds of thousands of Floridians have had their policies dropped or not renewed. Average annual premiums have risen to more than $4,200 in Florida, triple the national average. 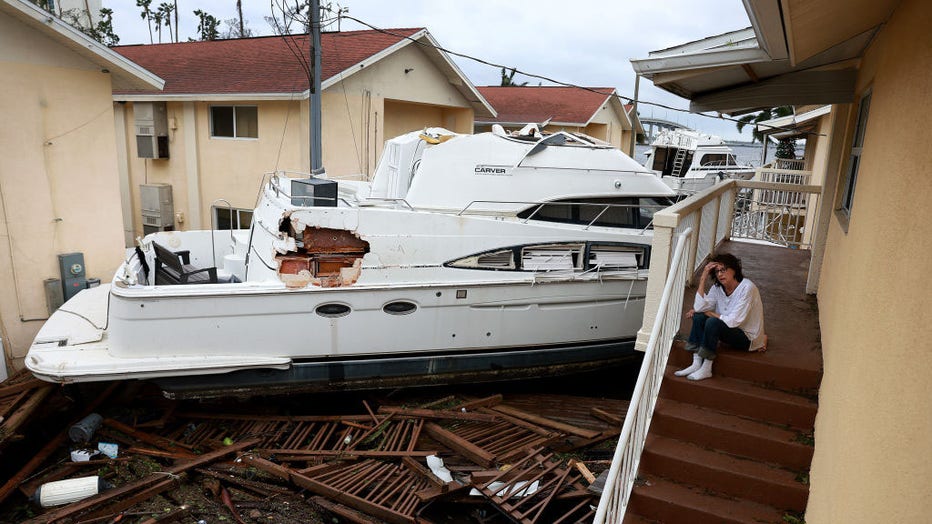 Brenda Brennan sits next to a boat that pushed against her apartment when Hurricane Ian passed through the area on September 29, 2022, in Fort Myers, Florida. (Photo by Joe Raedle/Getty Images)

More than a dozen companies have stopped writing new policies in the state, and several have closed shop this year. One company was declared insolvent and placed into receivership this week, as Ian was churning toward Florida.

State regulators and insurers have long blamed lawsuits by homeowners as a major culprit in the state's crisis. They say state law makes it highly profitable for lawyers to sue insurance companies even if the amount won is relatively small. In the last half of the 2010s, Florida accounted for about 8% of all homeowners’ claims in the U.S. but almost 80% of all homeowners’ lawsuits against insurers in the U.S., according to a letter from the state Office of Insurance Regular.

How insurers are looking at climate change

Jerome Haegeli, Swiss Re's group chief economist who analyzes economic and insurance market research, shares how the sector is looking at the risks of climate change.

In May, with hurricane season approaching, the state legislature convened for a special session to address the insurance crisis. In three days, with little public input or expert analysis, lawmakers approved sweeping legislation with bipartisan support that many in the statehouse regarded as a meaningful first step in repairing the market.

Among the provisions was the creation of a $2 billion reinsurance program that insurers could buy into to help insulate themselves from risk, so long as they reduced rates for policyholders. The law offers grants of up to $10,000 to retrofit homes, so they are less vulnerable to hurricane damage. It also moves to limit various attorney fees in insurance-related lawsuits.

Even so, Florida's primary rating agency, Demotech, this summer threatened downgrades to around two dozen companies. But concerns about their creditworthiness faded somewhat after the administration of Gov. Ron DeSantis agreed to allow the state to back up the insurers.

DeSantis, during news conferences ahead of the storm, noted that flood claims could be a leading problem from Ian.

Home insurance policies — including those in Citizens — do not include flood coverage, which is handled under a federal program and is a separate issue from the insurance market. The federally-backed flood insurance is generally mandated for mortgaged homes in flood zones, but people who fully own their homes sometimes decline to get it, and it’s less common in areas not usually prone to flooding.

"We are looking at a lot of flood claims," the governor said when asked about the potential for claims to overrun Citizens Property Insurance. "I'm not saying there's not going to be a lot of wind damage, I mean it's a hurricane so you're likely to see that.

"There's more that I want to do in terms of the wind insurance and that will be something we're going to address. I mean look, at the end of the day we've got to make sure folks are taken care of, and so we will do that, whatever we need to do."

DeSantis, at a news conference Wednesday, said Citizens Property Insurance should be in solid shape even after claims from Hurricane Ian, given that the state-backed company has billions of dollars in surplus. A spokesman for Citizens said it estimates 225,000 claims and $3.8 billion in losses from Ian, though he noted those projections were made before the storm made landfall and would likely change as damaged is fully assessed.

"Their modeling, based on paying out a lot of money in claims for this, was that they would still have between 4 and 5 billion in surplus. So they view themselves as being able to weather this," DeSantis said.

More than 2.5 million people in Florida were under mandatory evacuation orders when Ian made landfall Wednesday afternoon as a Category 4 hurricane. Some residents left their homes, hoping for minimal damage upon their return.

"I just don’t see the advantage of sitting there in the dark, in a hot house, watching water come in your house," said Tom Hawver, a handyman in Fort Myers, who evacuated his home Wednesday. "And I can’t do anything about the wind or the water, so I’ll go back in a couple of days and assess it."

Hurricane Ian: How you can help victims and avoid scams