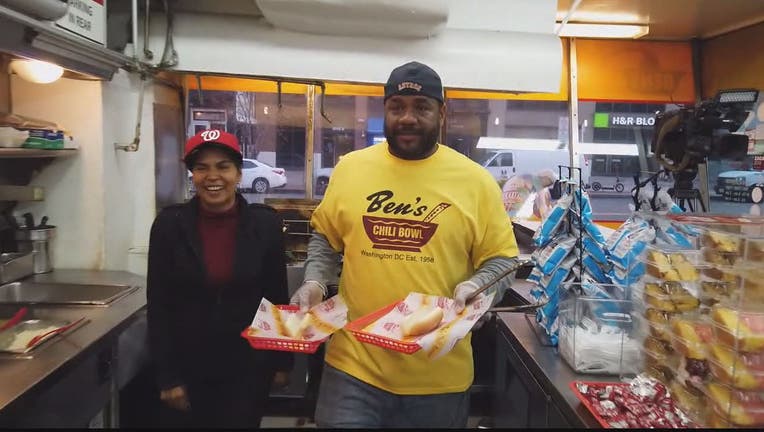 WASHINGTON - The Washington Nationals’ big World Series win may have come a few weeks back, but the victories – both big and small – keep on rolling in.

On Thursday, Astros super fan Marcus Davis – who founded The Breakfast Klub restaurant in Houston – paid up on a World Series bet he made with Kamal Ben Ali, one of the family members who runs Ben’s Chili Bowl in DC. Each man bet on his city’s team and if, let’s say, the Nationals won – Davis would have to outfit his staff in Ben’s shirts, he’d have to put up a “Go Nationals” sign in Houston, and he’d have to make a trip to DC to serve up half smokes at Ben’s.

The Washington Nationals’ big World Series win may have come a few weeks back, but the victories – both big and small – keep on rolling in.

Thursday marked his first (and only) day at work.

“Welcome to Ben’s, home of the World Series champion Washington Nationals,” Davis begrudgingly told a customer after some prodding. He cooked, cleaned, and generally cut up with customers. “I’ll have to get you some Astros gear,” he told one of them, a toddler sitting in his mom’s lap.

Overall the new employee was given a fairly positive review by Ali, who said that even though Davis showed up 20 minutes late for work, he’d still be happy to serve him some dessert.

“Humble pie,” Ali laughed. Davis, you could say, ate it up.