What is 'lake effect snow?' Weather expert breaks it down!

What is 'lake effect snow?' Dr. Elizabeth Thomas with University at Buffalo spoke with LiveNOW from FOX's Josh Breslow to explain.

BUFFALO, N.Y. - The historic snow piling up in western and northern New York is something you have to see to believe.

With snow totals surpassing 4 feet in areas near Buffalo, the enormous lake-effect snowstorm is producing a winter weather bingo from snow squalls to thundersnow.

A long-duration lake-effect snowstorm is well underway Friday, where some places will surpass the 4-foot mark and see the snow pile up through the weekend.

Cars and semis have become stuck in feet of snow in Hamburg, New York on Friday.

Locals are making the most of a severe winter storm in western New York that's brought over 3 feet of snow with more on the way.

Bands of heavy snow off lakes Erie and Ontario have been producing snowfall rates up to 3 inches per hour since Thursday night, vaulting storm totals in the city of Buffalo to 12.9 inches as of Friday afternoon, with considerably higher totals to the south, and the event is far from over.

A snow squall from Lake Erie photographed by a FOX Weather watcher looked like something white walkers emerge from in "Game of Thrones."

The squall could be seen engulfing a highway in a whiteout, which, thankfully, had no traffic due to the state of emergency declared by New York Gov. Kathy Hochul.

Another snow squall was photographed rolling toward Buffalo Harbour producing whiteout conditions at the state park.

Parts of NY wake up to nearly 2 feet of snow

Video from western New York shows nearly 2 feet of snow on the ground, and the lake-effect snowstorm isn't even halfway done.

A Lake Effect Snow Warning issued by the National Weather Service in Buffalo is in effect for Chautauqua County, New York until early Saturday.

It was good that the NFL made the call to move the Buffalo Bills vs. Cleveland Browns game to Detroit because the players would quickly lose the football at Highmark stadium. The last time an NFL game was moved due to a snowstorm happened in 2014 when the Bills were set to play the New York Jets.

Nearly 48 inches feet of snow has already fallen at the stadium created by the significant lake-effect snowstorm.

Photos shared by the Bills clearly show the goal posts, but everything else is buried in snow.

Incredible drone shots of thundersnow over the Buffalo skyline. Timelapse showing lake effect snow pushing in over the city. One shot resembles a haboob due to the sharp gradient.

Drivers in Hamburg, New York, were attempting to shovel a path for their trucks and tractor-trailers stuck in the snow, but the fresh powder was not letting up Friday afternoon. 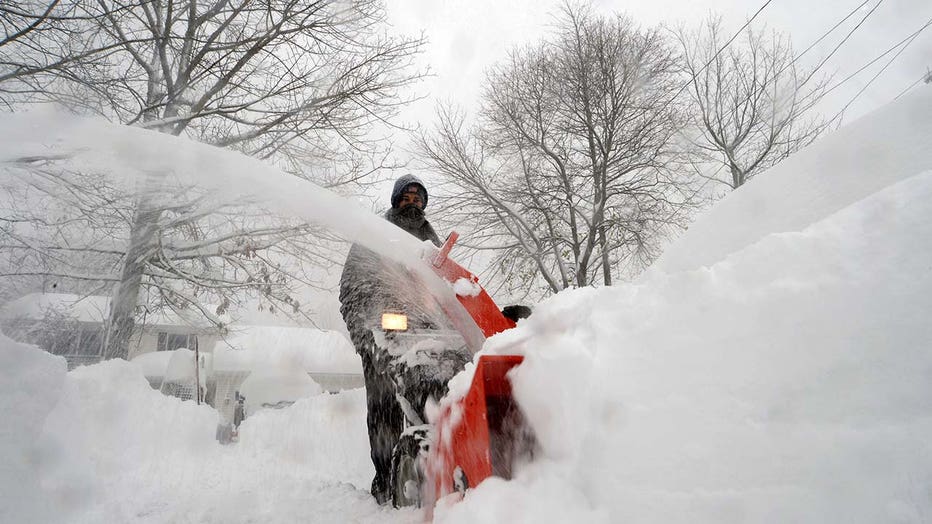 Joe Ahmed uses a snowblower to dig out after an intense lake-effect snowstorm impacted the area on November 18, 2022 in Hamburg, New York. Around Buffalo and the surrounding suburbs, the snowstorm resulted in up to four feet of accumulation, and addi

The most significant impacts of the snowstorm are yet to come, with more lake-effect snow on Saturday.

Mayor of Oswego Billy Barlow says lake-effect snow bands caused widespread power outages, school closures, and many accidents on roadways Thursday. With more snow in the forecast, Barlow tells FOX Weather the city of Oswego is bunkering down for ‘a really long weekend.’

Barlow said Upstate New York is known as "snow country" for a reason.

"We know how to handle the snow and how to deal with storms of this size, although this is a little early in the year for us," Barlow said.

Oswego snow plows were pulled out of the garage a little early and crews were on the road Thursday preparing for the storm.