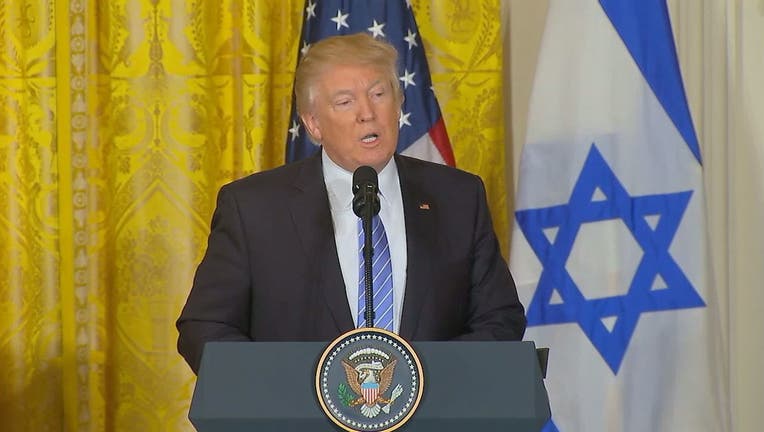 The mangled spellings that were a staple of Donald Trump's presidential campaign are flourishing in the White House.

It started on Trump's first full day in office, when he described himself as "honered" to serve as the 45th president.

This was probably not a typo: Trump had used the same spelling a year earlier, when he tweeted that it was an "honer" to win post-debate polls.

But on to more serious matters, such as foreign affairs.

Trump's first presidential visit with a foreign leader was with British Prime Minister Theresa May in January.

(To be fair, so did the British Embassy in Washington a month earlier. And the AP itself at times has botched the spelling.)

This month brought serial spelling malfunctions when the White House released a list of 78 terrorist attacks that it said had been under-reported by the media.

Over the weekend, Trump tweeted that he "playef golf" with the Japanese prime minister, then quickly deleted and fixed the typo.

On Monday, a White House release on the president's phone call with Colombian President Juan Manuel Santos referred to the country at one point as "Columbia."

Just nitpicking? Does it really matter?

"It really goes to the heart of credibility," says Sue Burzynski Bullard, a board member at the American Copy Editors Society and a professor at the University of Nebraska-Lincoln. "If you can't get basic spelling and grammar right, people start to wonder what else you got wrong."

Little details count, she says, pointing out Trump's errant use of a hyphen in a Wednesday morning tweet in which he referred to "this Russian connection non-sense."

"Where does that come from?" she asked.

Her advice to the Trump White House: "They need to slow down and edit themselves, or hire some editors."

She does allow that everyone makes the occasional typo and that people "get a little more license on Twitter."

Other spelling aficionados are less concerned.

No less an authority than Jacques Bailly, the University of Vermont professor who once a year calls out the words at the Scripps National Spelling Bee, isn't too bothered.

"I can't take it very seriously that somebody doesn't know how to spell," he says.

"Spelling is not unimportant, but there are a lot more important things, like how you use the words and the content of them."

But Bailly also offers this: "There are ways to correct this, and perhaps that would be a good idea."

Spellcheck would help a lot, he says, adding, "A lot of these words aren't rocket science."

The White House stressed it has put out nearly 400 press releases, statements and fact sheets as well as many more social media posts, and said it was "constantly updating processes to ensure we are communicating the president's agenda as articulately as possible."

While its spelling issues were far more limited, the Obama White House had its own bobbles. February came out as "Feburary" on a few press schedules in 2015. And President Barack Obama memorably dropped an important "E'' in praising Aretha Franklin as the queen of soul in 2014: He was talking about her signature song and said that Franklin "told us what R-S-P-E-C-T meant to her."

The Trump administration's spelling challenges extend beyond the White House.

The Education Department last week made a double gaffe when it tweeted a quotation from W.E.B. DuBois that spelled the African-American sociologist's last name with an "E." It later updated the post and offered "apologizes for the earlier typo." The mistakes were blamed on a longtime employee.

The Library of Congress recently posted sales marketing material for an inauguration poster that included a Trump quotation that said, "No dream is too big, no challenge is to great." That should have been "too great." The mistake was attributed to a third-party vendor.

The administration's outsized share of spelling mistakes shouldn't come as a surprise, given Trump's track record during the campaign and transition.

In December, he referred to the Chinese seizure of a U.S. Navy drone as "unpresidented." The tweet was deleted and the word corrected to "unprecedented."

During the presidential campaign, Trump ridiculed GOP rival Marco Rubio as a "leightweight chocker," faulted Ted Cruz for "L-Y-E-N'," and tweeted that commentator Lawrence O'Donnell was "one of the dummer people on television." Obama's first name came out as "Barrack" in a Trump tweet, famed basketball coach Bobby Knight morphed into "Bobby Night" and the city of Phoenix became "Phoneix."

Perhaps Trump can get some advice from the next winner of the spelling bee: Seven presidents, including Obama, have met with spelling champs.