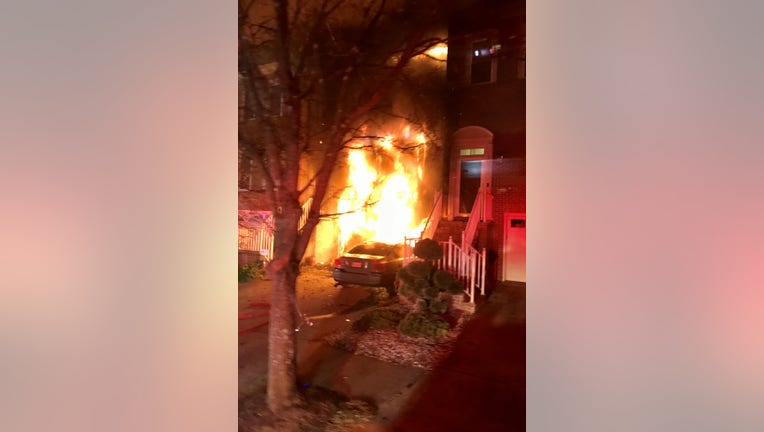 GAITHERSBURG, Md. - Fire officials in Montgomery County say two grandparents and their two twin-18-month-old grandchildren are alive thanks to the quick and selfless actions of a Gaithersburg neighbor.

That neighbor, George Totoreanu, told FOX 5 Sunday morning that "Kindness is the most important thing. Make sure – I know a lot’s been happening in DC lately but none of that matters. It’s everybody in the community and … I was just happy to be able to give back to my community."

Totoreanu told FOX 5 he was playing video games with his younger brother at the time and just happened to look out the window, across the street, then set his headset down when he saw the flames.

In disbelief at wheat he was seeing, Totoreanu says he alerted his fiancé, who called 9-1-1.

Totoreanu then told FOX 5 he ran in slippers to start banging on doors and found a shocked, older man at the door. He escorted the man to a safe area.

The Gaithersburg neighbor said he then asked if there was anyone else.

Totoreanu’s fiancé, Cynthia Gaeta, told FOX 5 she was on the phone with a 9-1-1 dispatcher and complete stopped talking the moment she saw her future husband run inside the burning home.

Totoreanu told FOX 5 he encountered an older woman, the man’s wife, holding one grandchild in her arms and pointing in the direction of a second also inside.

"I went and got the kid and then, she had gone into a different room,  so I went back in there and told her to get out. And then I went in front of her and just told her to follow me. So I kept yelling at her, 'Come on, come on,'" said Totoreanu as he carried the other grandchild out to safety.

The neighbor says flames covered the front door by the time they got down.

"She didn’t want to come out through the door, so I kept yelling at her, get out right now, and then she got out," he said.

Officials believe the older couple were both shocked and possibly disoriented. A family member tells FOX 5 the couple are 75 and 65-years-old.

Piringer also described how tough the weather conditions were for firefighters fighting the flames.

Piringer said crews were there through the night and into the early morning. Around 85 firefighters battled the two alarm fire.

Piringer told FOX 5 while the cause is still under investigation, fire officials believe the fire started in the garage, which is one of the few areas of a home that does not have sprinklers and fire alarms.

He called it an accidental fire and said it appeared to be electrical in nature, spreading to the car.

Piringer described the flames engulfing the outside of the home and sort-of wrapping around to the ceiling, which appears to be why smoke alarms apparently did not go off inside.

The family was believed to be sleeping inside when a neighbor they had never met before, rushed into save them.

Fire investigators do not advise people to run into burning buildings.

"Certainly his actions were life-saving and made a big difference," said Piringer in this case.

"I mean we’re speechless. Very full of gratitude. I mean, he may have saved everyone’s lives, or at least those kids," said Michel Moussa, the uncle of the two toddler children.

Moussa told FOX 5 his brother and family want to thank Totoreanu in-person. His parents are lucky to have Totoreanu as a neighbor, Moussa added.

The fire department estimates over $2 million in damages. The fire was so intense, both the immediate home and neighboring homes experienced damage. Multiple families have been displaced.

The hero-neighbor told FOX 5 he and his fiancé met in the Army and had  just moved into their Gaithersburg townhome in December. The couple says other neighbors also jumped in to help warn others and get the older couple and grandchildren into a warm home until their family arrived.