On Feb. 2, 2022, Punxsutawney Phil emerged from his tree stump with the help of his inner circle and saw his shadow -- predicting six more weeks of winter -- during a ceremony in Punxsutawney, Pennsylvania.

PUNXSUTAWNEY, Pa. - Punxsutawney Phil, Pennsylvania’s most famous groundhog, awoke Tuesday morning and saw his shadow — which, according to folklore, means there will be six more weeks of winter.

Each year on Feb. 2, thousands descend on Gobbler's Knob in Punxsutawney, Pennsylvania, to watch the giant rodent make his annual weather prediction at dawn with the help of his "inner circle."

According to the legend, there will be six more weeks of winter if he sees his shadow. If he doesn’t, spring comes early.

"Winter has been bleak, and bereft of hope, yet winter is just another step in the cycle of life," one of Phil's top-hatted inner circle members read from a scroll. "I couldn't imagine a better fate. With a shadow I have cast... six more weeks of winter!"

In 2021, Phil predicted six more weeks of winter. The 2020 forecast called for an early spring.

The groundhog tradition is thought to have originated in the 1800s and over time has become a staple in America’s culture.

The event took place virtually in 2021 because of the coronavirus pandemic, depriving the community, which is about 65 miles northeast of Pittsburgh, of a boost from tourists. This year, thousands returned to celebrate the annual event.

"This is the largest mid-week crowd we’ve ever had in the history of Groundhog Day," Jeff Lundy, president of the Groundhog Club’s Inner Circle, told the crowd.

Records kept by the Punxsutawney Groundhog Club show Phil has predicted 105 continued winters and only 20 early springs. According to the Stormfax Almanac, that works out to a 39% accuracy rate for Phil.

In the near term, the groundhog’s accuracy rate is slightly better. According to the National Oceanic and Atmospheric Administration, Phil has been right about 40% of the time on average over the past decade.

Just how accurate is Punxsutawney Phil?

Every Feb. 2, America turns to the town of Punxsutawney, Pennsylvania, for a sliver of hope that cold winter will end sooner rather than later.

Last year, Phil predicted more winter. According to NOAA, his forecast was about half right. February 2021 was the coldest since 1989, but March turned out to be warmer than normal.

"Predicting the arrival of springtime for an entire country, especially one with such varied regional climates as the United States, isn’t easy," NOAA says on its website. "Phil’s track record is evidence of that." 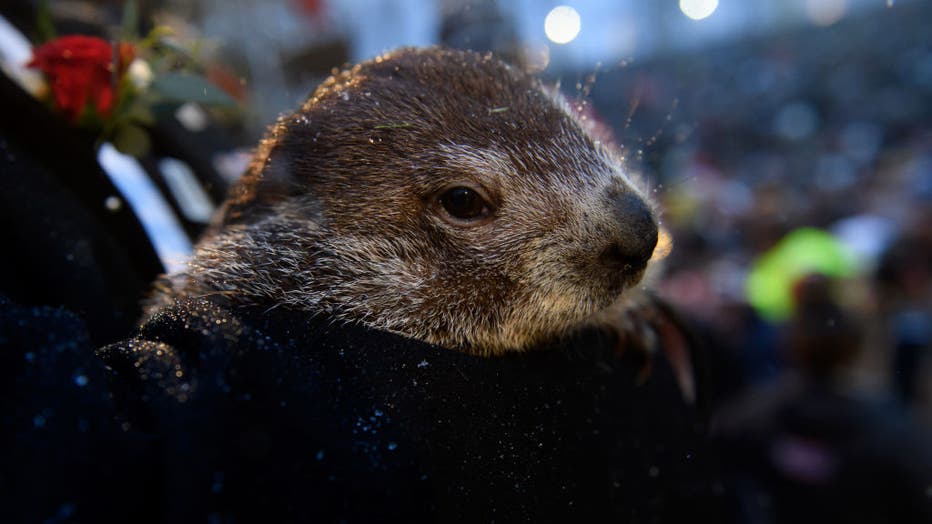 FILE - Groundhog handler John Griffiths holds Punxsutawney Phil, who did not see his shadow, predicting an early or late spring during the 134th annual Groundhog Day festivities on Feb. 2, 2020, in Punxsutawney, Pennsylvania. (Photo by Jeff Swensen/G

The celebration of Groundhog Day began with Pennsylvania's earliest settlers, according to the groundhog club. They brought with them the legend of Candlemas Day, which states, "For as the sun shines on Candlemas Day, so far will the snow swirl in May...," the club notes on its website.

The ancient Christian tradition of Candlemas included clergy blessing and distributing candles needed for winter. The candles represented how long and cold the winter would be, History.com notes. Germans expanded on this by selecting an animal — the hedgehog — as a means of predicting the weather.

"Once they came to America, German settlers in Pennsylvania continued the tradition, although they switched from hedgehogs to groundhogs, which were plentiful in the Keystone State," the outlet writes.

Punxsutawney held its first Groundhog Day in the 1800s. The first official trek to Gobbler's Knob — a tiny hill just outside of the town — wasn't made until Feb. 2, 1887. That year, Phil saw his shadow.

His first prediction of six more weeks of winter was accurate for a few regions, but it came up short for several others, according to the NOAA.

Why is the groundhog's name Phil?

Some news outlets have noted that "King Philip" may refer to the English name given to Metacomet, the chief of the Wampanoag people who formerly occupied parts of present-day Rhode Island and Massachusetts.

Prior to being called Phil, he was called Br'er Groundhog, according to the club.

Elsewhere, onlookers normally flock to Groundhog Day festivities in Milltown, New Jersey, to catch a glimpse of another groundhog celebrity named Milltown Mel. However, it was revealed that the weather-predicting rodent died just before his annual big day.

Milltown said it canceled the event because the wranglers don't have time to find a replacement for Mel.

"We Wranglers are sad to report that Milltown Mel recently crossed over the rainbow bridge," a Facebook post said. "Considering the average lifespan of a Groundhog is about 3 years, that is not such a shock, but Mel left us at a tough time of year when most of his fellow groundhogs are hibernating."