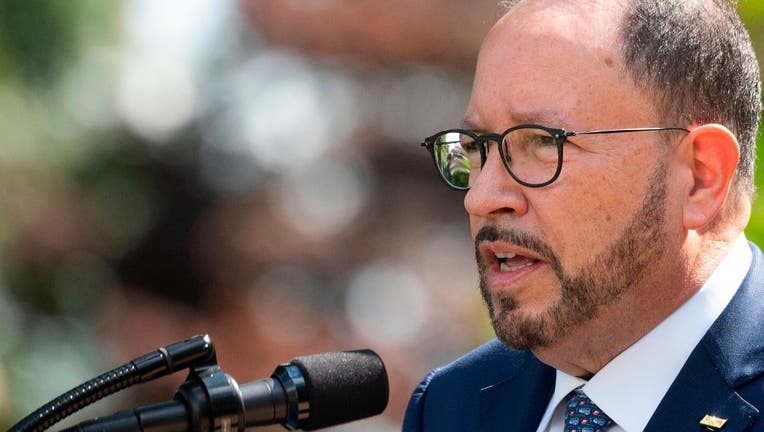 Goya Foods CEO and President Bob Unanue speaks prior to US President Donald Trump signing an Executive Order on the White House Hispanic Prosperity Initiative in the Rose Garden at the White House in Washington, DC, on July 9, 2020. (Photo by JIM WATSON/AFP via Getty Images)

FOX NEWS - Goya is getting canned.

Politicians and celebrities are boycotting Goya, which claims to be the largest Hispanic-owned food company in the country, after its CEO, Robert Unanue, praised President Donald Trump during an event Thursday at the White House.

"We're all truly blessed at the same time to have a leader like President Trump, who is a builder," said Unanue, who is of Spanish descent.

Trump hosted Hispanic leaders at the White House on Thursday and signed an executive order on the White House Hispanic Prosperity Initiative to use more taxpayer support for private and charter schools and “improve access by Hispanic Americans to education and economic opportunities.”

Unanue also announced the New Jersey-based company would donate 1 million cans of chickpeas and other items to food banks.

Critics like Rep. Alexandria-Ocasio Cortez, former Democratic presidential candidate Julian Castro and a number of celebrities took aim at the company on social media with hashtags like #BoycottGoya.

Castro, who served as Housing and Urban Development secretary in the Obama administration, tweeted that Goya’s CEO is,“praising a president who villainizes and maliciously attacks Latinos for political gain.”

Ocasio-Cortez remarked, “Oh look, it’s the sound of me Googling ‘how to make your own Adobo.'” AOC followed up the tweet with an alternative recipe for the seasoning.

Stars like Chrissy Teigen and "Hamilton's" Javier Munoz also spoke out against Goya.

Immigrant youth-focused organization United We Dream created a petition for people to stop buying goods from the company, saying it wouldn’t support those “who endorse and comply with a White Supremacist regime.”

"We all know that Trump has not stopped attacks on immigrants, Latinx folks, Black people, and all people of color, since day 1. We must show CEO of Goya Foods Robert Unanue that we won’t stand for this! If Goya wants our business, they must respect and fight for our humanity!" the organization said in a statement.

Goya did not immediately return FOX Business' request for comment.